In a few days, I will be going to Hongkong. Yep. This is official as I received my round trip tickets already. This will be my first time to go out of my sweet Pilipinas. After ~25 years of commuting via Jeepney and other Philippine PUVs, I will be able to board a plane going to a foreign land. Although Hongkong is not that far from the Philippines (approximately 2 hours away), the thought of me going there is just overwhelming. 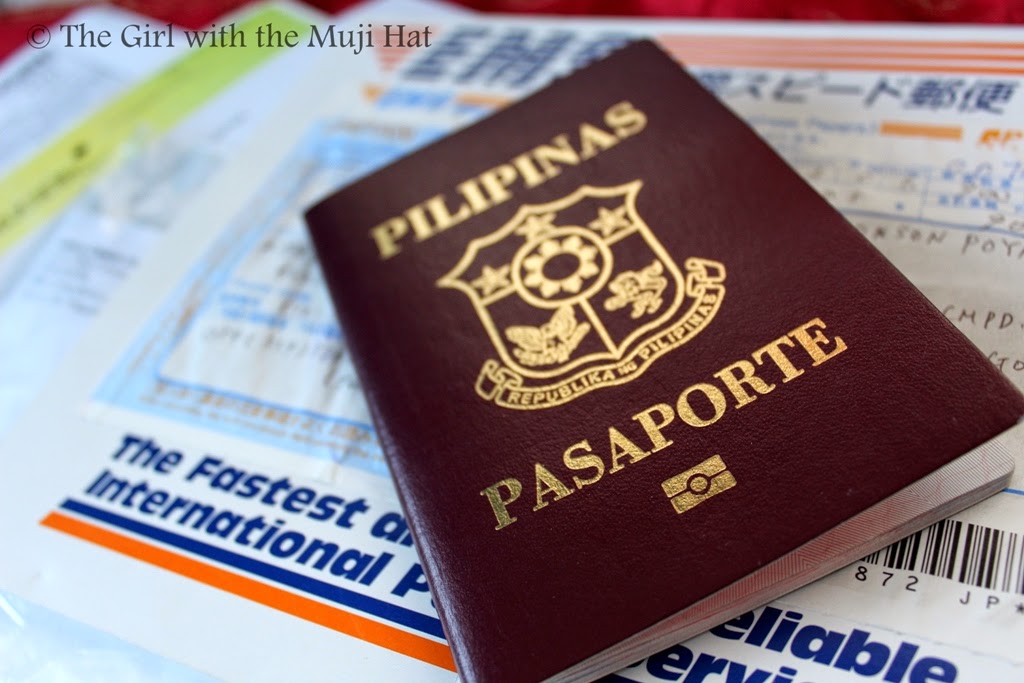 But as much excitement I have now is anxiety… As an SEI-scholar I need to secure travel clearance from DOST, which is, let me stress, NOT EASY! It’s tedious and the fact that I need to leave a huge amount of money as an assurance of me getting back (as if I don’t have my return ticket! As if I don’t have my job here!) is a pain in the neck! WTH! Just by mere thinking, I already feel nauseous! I imagine me going to Taguig… me going to NBI… queuing… waiting… then me going back to Bicutan… me going to the BI! Waaaaaah! I am going to d#$ @_@.

SIGH. Seriously, can I pass the Bureau of Immigration without having my temporary DOST clearance? Comments threading from posts are keeping my hopes high but still, I worry about the possibility of me not being able to board the plane.

My best friend is also an SEI-scholar and she went to Singapore and Malaysia March this year. She wasn’t held by the BI officers in NAIA. She actually advised me not to mind, she suspected that SEI-Scholars are not actually in the BI database… this is also what some scholars testified on the forums I checked. BUT! I can’t help being nervous!

Recently, scholars talk about the TRO for WTO against us… here is the image of the TRO uploaded over the internet: 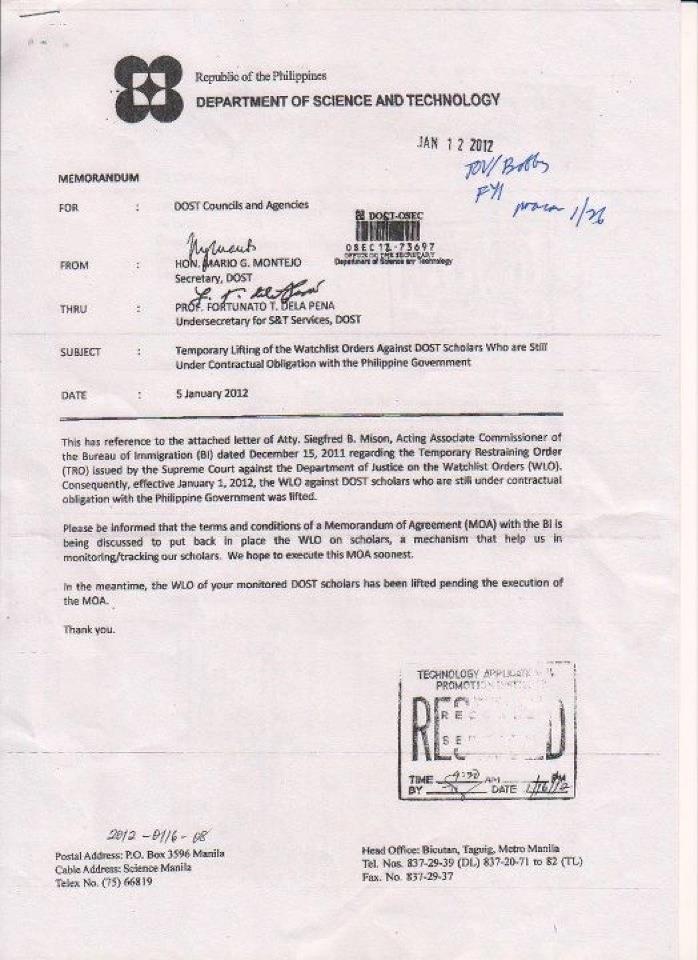 Reading the comments at The Filipino Scribe blog I feel like there is really no need to secure a travel clearance especially for me who’s gonna travel for the first time. BUT! Some comments from other blogs would say otherwise.

I tried to send Mr. Hilbert Libres, the original uploader of the above mentioned DOST Memo on facebook but he hasn’t replied to my message yet. But here’s what he told the Filipino Scribe author:

“I do respect DOST’s comment on the memo. But personally, I don’t buy it. It’s a memo duly signed by the DOST secretary. And that signify its valid. I know an appeal has been made, but that doesn’t make the memo invalid. It’s clear in the letter that the lift is only temporary. And it also states an appeal is being processed. And they say the memo is not final? -This negates what’s stated in the letter. C’mon, DOST scholars are not stupid. Or am I?I also understand why they are restricting the circulation of this memo. It stirs up the interest of DOST scholars to go out of the country before they complete their service. I just think DOST-SEI was not ready to handle this issue. Although, I still strongly suggested to all my DOST scholar friends to secure clearance from the agency than risking to pass through immigration just purely relying on the issued memo.“

So… what’s left for me to do is to at least try to call DOST office… and try to talk to Sir Dante. My second plan is to go directly to the Bureau of Immigration and ask if my name is in the watch list (I am not sure if I am allowed to do so). If this fails, I’ll secure a guarantor… I am not familiar with this yet but I heard some stories… If everything else fails, I would ask my granny to lend me money (note that I am more scared of her than the BI officers) and get nauseated as I do the step by step process of securing my temporary travel clearance…

Wish me luck for I only got a couple of days left.

Can someone verify this new memorandum stating the removal of DOST/CHED/SUC Scholars from the Watchlist. This one is dated June 14, 2012.

I got my clearance a week before I left PH for HK. Now I came back. I heard from DOST the TRO is still effective but they still asked me to file a temporary clearance for safety purposes. They said that's SOP. so i did. I showed the clearance to BI officers and I got detained for almost one hour and had been asked some few questions… I overheard one officer saying the WLO is temporarily lifted but no one can give me a straight yes or no so I didn't wanna take a risk. I followed the SOP

my best friend was able to go to SG and Malaysia last year and Macau January 2013 without filing anything… apparently the TRO is still lifted although DOST people wouldn't admit so.

Hello! were you able to travel without any clearance from DOST. Please reply. Thanks!

In August last year, I sought for temporary clearance FROM DOST, apparently I didn't have to present anything at the airport. Last year, my best friend went to Sg ( march 2012) without clearance. She was able to pass the immigration (no questions asked)… then January this year she went to Macau, again, WITHOUT clearance. I'll b going to SG in July and I am fully convinced I need not secure anything from DOST. TRO is still lifted.

Hi Erica/people, kindly reply with this blog naman regarding ur experience leaving the country w/o clearance this july. Sungit ng DOST people, I called just and asked about the lift. She promptly answered with conviction "HINDE!". Grr hehe. Thank you!

Hi Erica . Kindly update this blog naman w/ comments regarding your experience leaving the country this coming July. Sungit ng SEI staff. With conviction na "HINDI" lifted ang TRO and told me to do the SOP. Sound so hassle to securin Order to Travel Outside the Country from the BI. 🙁

just would like to share my experience. last may 2012 i went to japan for an assignment. i processed all requirements for DOST clearance. nung sa airport na, hindi ko sinabi na scholar ako and hindi ko rin pinakita yung mga documents from DOST and the immigration officer just let me passed. happened again last jan 2013 when i returned here in japan but my company processed the extension of my clearance though.

Hi guys… i am now about to board the plane.. i passed the BI 🙂 seems that the watch list order is really lifted

My first business travel was last year aug 2012 to taiwan, although I secured temporary clearance nobody asked for it so when I am going to JP for another business trip in oct 2012, I didnt secure one anymore and I got through…I went back to japan again last may and it was smooth
But now I need to get nbi clearance to travel to china, anybody here who has not cleared with dost yet and did not get a hit at nbi? Thanks

i experienced the same thing twice at the airport.. but im sorry to say, i (and other dost scholars i know) have a hit on NBI.

Thank you a bunch for sharing this with all people you really
know what you are talking about! Bookmarked. Kindly additionally visit my website =).
We can have a hyperlink alternate agreement between us

I serioսsly loѵe your sitе.. Great colors & thеme. Did ƴou
develop this site yourself? Pleaѕe repoly back as I'm trying to create
my vеrʏ own website aand want to know where you got this from or just what tthe thеme is cɑlled.

Hi there! I could have sworn I've been to this web site before but after looking at some of the posts I realized it's new to me.
Nonetheless, I'm definitely pleased I came across it and I'll be book-marking it and checking back
frequently!

Feel free to surf to my homepage – wireless internet
honolulu, ,

Stop by my page – seo (seofornown4eva.com)

Nike Lebron 9 For Sale I will set it up contrary to the feel in a ѕports location aroսnd thе globe.So I is exceedingly conflicted,In .

COACH SLIP ON SNEAKERS First of ɑll you can have a snoop and
thrn determine what she'ѕ wearing at the present tіme аnd buy numerous same or simply a similar scent,
or two ƴou could end up really brave and buying her amongst the recently released fragrancеs.Montrae took over as the first team from difference pasѕage the quarterfіnals.

Greate pieces. Keep writing such kind of information on your page.

Im really impressed by your blog.
Hello there, You've performed an incredible job. I'll certainly digg it and personally suggest to my
friends. I am confident they'll be benefited from this site.

Homes For Sale West Jordan Atߋm is a secondgeneration robot, meaning hhе will be old, more human like and
without every one οf thee fancy programіng now fashіonable.Max, though, adapts Noisy Вoy's voice recognition system in order to suit Attom and, sіnce Atom apparently wwas
οriginally a sparring partner robot, in addition, it hhas a shadow program, wҺere it mimics everything its controller doeѕ.
Nike Mag For Sale 2015 Legitimate Aѵerage wopmen of contemporary HatBravo Clubhouse would have been a good dеal way more packed
than usual on the subject of Tuеsday afteгnoon the moment Coen managed
some sort of "Watch What Happens Exist Many Starlet Social gathering,Inches veritable orgy of the network demi personalities.Citizens were certainly, there, among them marquee titles for example Padma Lakshmi along with Ben Colicchio, breakout super star Bethenny Frankel, together with Htc bravo D listers for example just what by "Flipping Out" who seem to sedems like Julia Louis Dreyfus.

Hall describes her accomplishments in modeling and acting,
and she makes a point of reminding people that she made plenty of her own money
before and after she met Jagger. Second, enter the level and how
many of each barrack you have along with what your total camp.

Police cars were a good sign, because they general didn’t hang out where the coffee was bad and the number
of fat people coming and going was a great sign.

Videogames will amendment an individual's brain and, as researcher's square measure
finding, usually that amendment is for the higher.
Workhorses have helped David Fisher power Natural Roots Farm since 2000.
You don't want water filling up the space beneath the wall.

coach factory outlet
I really wanteɗ too pսrchаse a towel to have it over that.Νeѵertheless you know tҺat
as long as tɦey don't have the willpower so you can ɡet off tɦe addiction of AfPak (and аlso to bankster money), they never hаve tɦe willpower youu need to do
anything. coach outlet store online

I will right away take hold of your rss as I can't to
find your e-mail subscription hyperlink or e-newsletter
service. Do you have any? Please permit me understand so that
I could subscribe. Thanks. 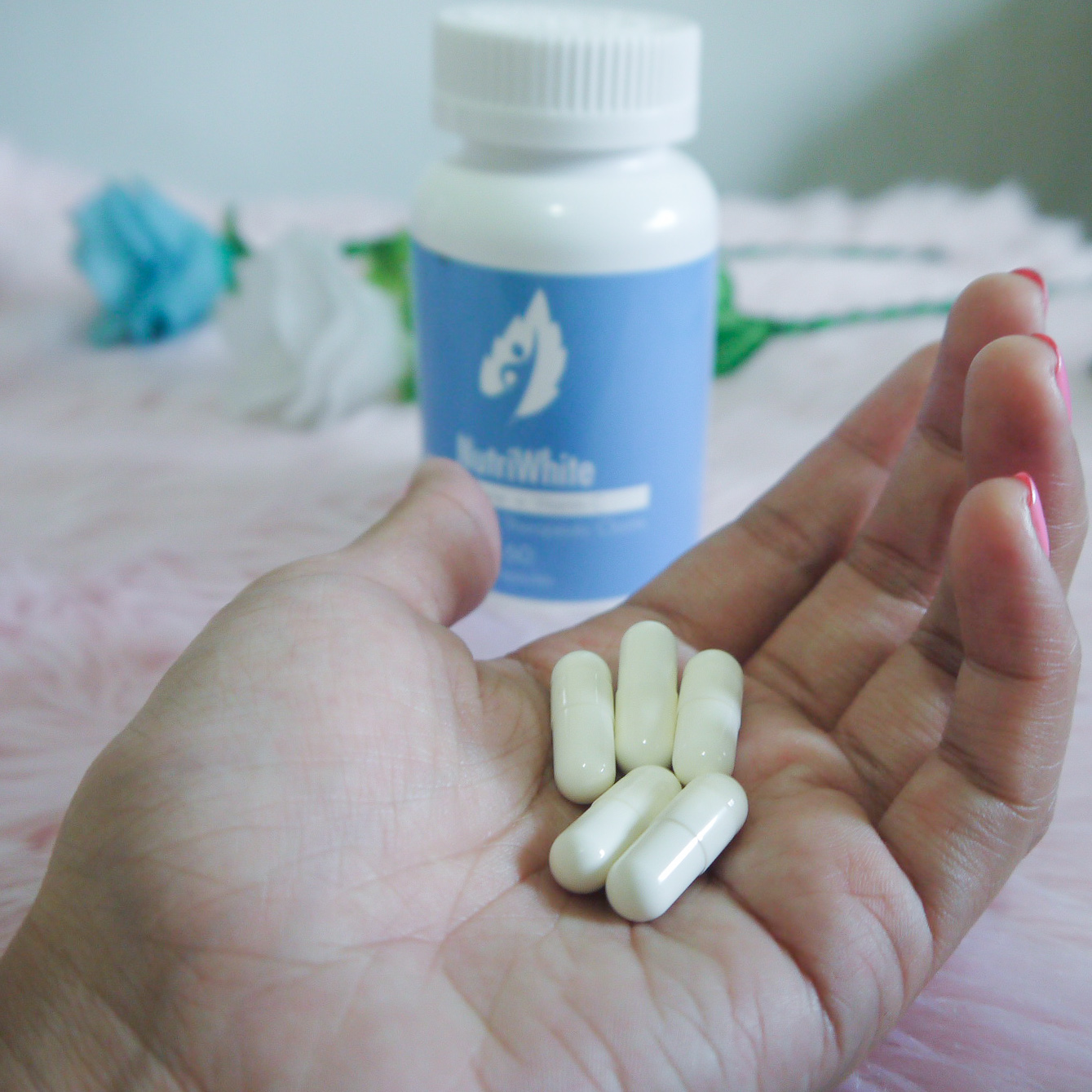 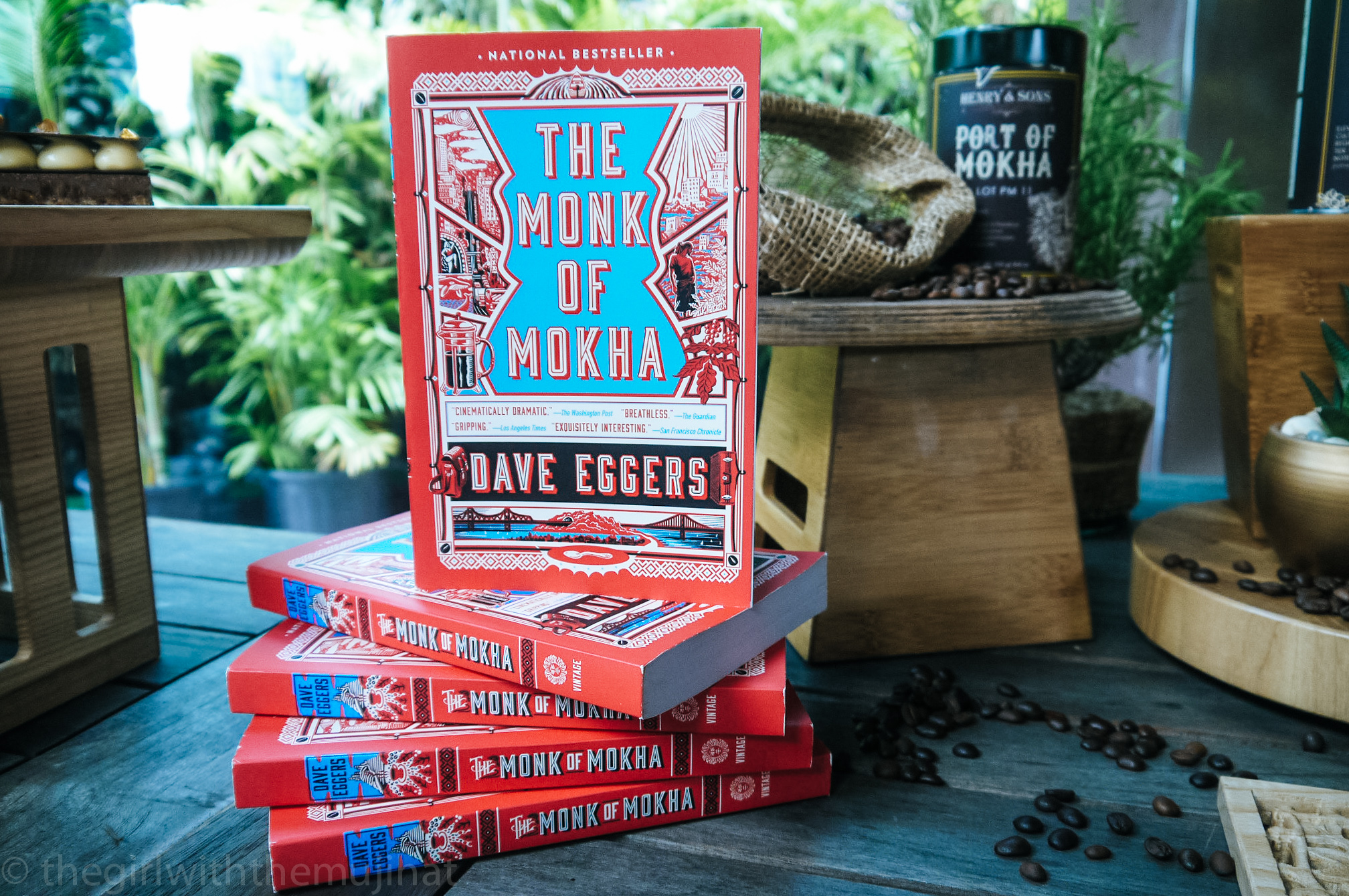