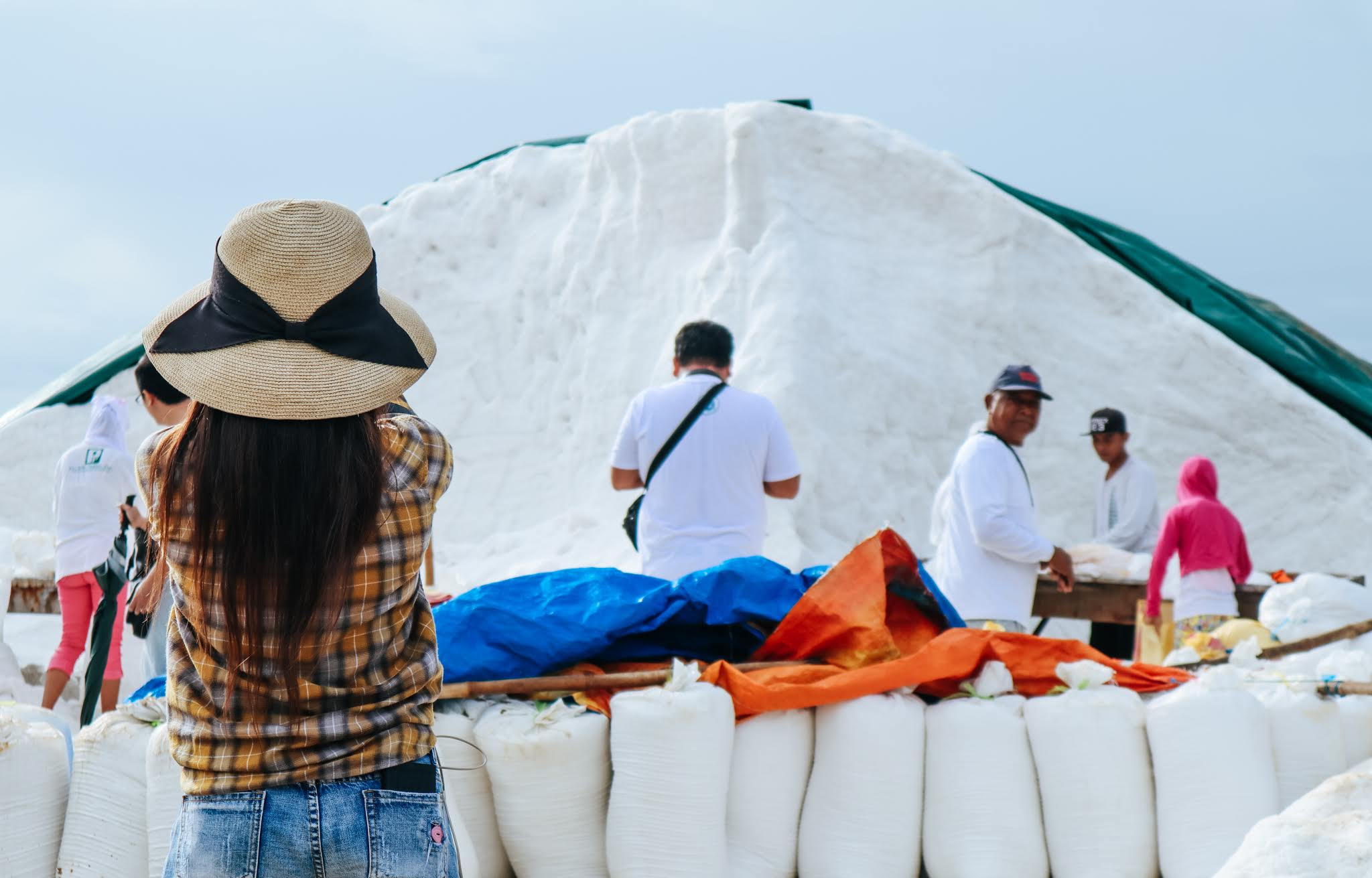 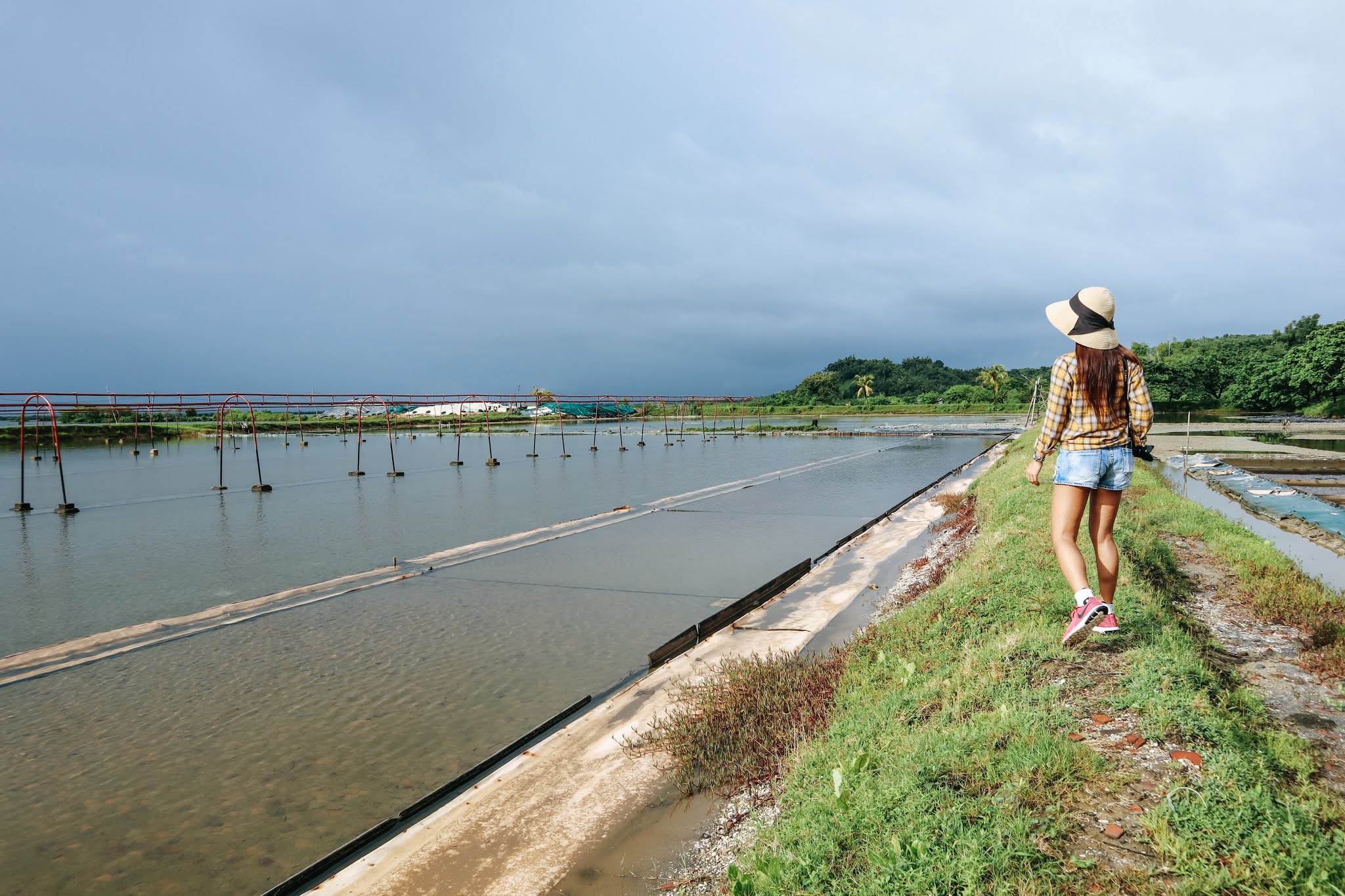 I’ve visited several farms before—including dragon fruit and crocodile farms in Davao. But it was just this week that I managed to make it to a salt farm.

Are you familiar with how salt is harvested? Do you know the different uses of salt in your daily life? Is it good for your health? These questions (and more) are addressed during the agri-eco tour at the Pacific Farms Inc. (PFI) in Bolinao, Pangasinan.

The one-day tour allows you to explore the 500-hectare property of the PFI with a friendly guide assigned to each station.

The first station is the view deck where you begin your salt farm journey with the province’s rice cake delicacy called “binungey”.

Also known as “bamboo rice cake”, binungey is made with a mixture of sticky rice, coconut milk, coconut meat, and water slowly cooked inside a bamboo shell. It is slightly sweet in taste and generally cooked like any other steamed rice, and thus makes the perfect pair for Aro-en gourmet salt tasting.

Pairing different gourmet salt with the binungey is a good way to discover what salt can do as a taste enhancer. To do this, spoon a serving of the warm binungey and sprinkle it with a little salt. Taste the difference each gourmet salt does to the binungey’s flavour. In between the salt pairing, you can wash your palate with the ripe mango. There is also malunggay tea for refreshment.

PFI’s gourmet salt is rich in sea salt minerals. It is also organic, natural and is commercially available under the brand name Aro-en, which in English, translates to “Love””it”. Aro-en is named such because it communicates PFI’s love for deliciously prepared home-cooked meals and encourages people to express their “love and warmth” in the same way.

Each variety has a specific application to bring out the desired flavour in any dish. For example, the smoked salt’s intense, smoky flavour is good for bringing out that char-grilled flavour in the mouth for steak and other savoury food. The fluer de sel adds an impressive dash of flavour to different food including sweets like chocolate and caramel. Krispy Kreme uses fleur de sel on their caramel doughnuts. The bitter salt is used to dampen the strong bitter taste of coffee. You can learn this “introductory to the wonders of salt” while exploring your taste buds during this first stop at the view deck.

Other things you can view from the deck are a comparative view of the salt beds, a congregation of local egrets traversing the sky, and the glorious sunrise too!

At about 6:40 AM, we arrived at the second stop. The guide assigned to this station explains the meaning of “Pangasinan” as the “place for salt making”. He also narrates the short history of the Pacific Farms Company, including the significance of what we’re about to see at the top of the hill.

Being an employee for 25 years, our guide sure has some interesting stories to share. His stories were getting interesting until it started raining. Good thing I wore closed shoes. If you want to avoid wet toes from muddy trails, I recommend you wear trainers or hike shoes for this trip especially if you are doing it in the rainy season.

The hike to the Chapel Ruins is short and easy, but definitely worth it especially for birdwatching and/or if you are attending the company annual fest: Unity Day. It offers a relaxing sanctuary underneath stands of trees. You’ll feel refreshed on a clear day especially when you socialize and feast with the rest of the employees.

You may think that the love bridge is just another bridge (and probably a very short one) but to the employees, it is a testament to how “love” prevailed over the conflicts between the new management and the labour union of the Pacific Farms.

Even before the management transitioned from the Araneta clan to the Khonghun family, the Pacific Farms was already experiencing a great financial crisis—its workers had not been paid for six months and the company had many debts to suppliers and other agencies.

It was on the Love Bridge that Mr. Johnny Khonghun, the farm owner and CEO of Salinas Foods Inc., arrived and faced with the enraged workers. The encounter was chaotic. In the middle of the tense moment, a goat suddenly gave birth. The process took hours up until the heat of noon and made a number of workers go home. This paved the way for a peaceful transition.

An old folk then proclaimed that the incident symbolized a new beginning. They believed the Pacific Farms will be able to thrive again.

Here we were met by a new guide. He explains the long, arduous process of harvesting salt.

The salt in PFI is harvested through solar evaporation from the seawater. It begins by allowing seawater into the evaporator, where it is managed using a brine system. The evaporator occupies 90% of the area to concentrate the seawater into high brine. The wind and the sun evaporate the water from salt beds, leaving the salt behind. The process can begin as early as October. Then salt is harvested during the months of February until May.

In this station, we tried scraping crystallized salt and put them into the bucket. It was not easy. Long hours of scraping is like an upper body workout that would tire your arm muscles. I can imagine it’s even more challenging in summer.

If you visit this salt farm, you’d not only hear about the salt-making process but actually get to try it yourself. Hopefully, this brings you a greater appreciation for the farmers who dedicate their lives to producing salt.

In the Pacific Farm’s salt lake, Chi or energy is very high. The lake has a temperature that ranges from 70 to 75 degrees Celsius—hot enough to boil eggs. So the company decided to use this solely to produce another home-grown product: the mighty energy eggs.

The mighty energy eggs are found to have high contents of protein and other essential minerals like zinc, magnesium, potassium, calcium, and iron. Because of this, they are considered natural health food. Agri-eco tour participants get to taste the mighty energy eggs after they are harvested. Every year, these eggs are celebrated during the Pacific Farms’ Unity Day. 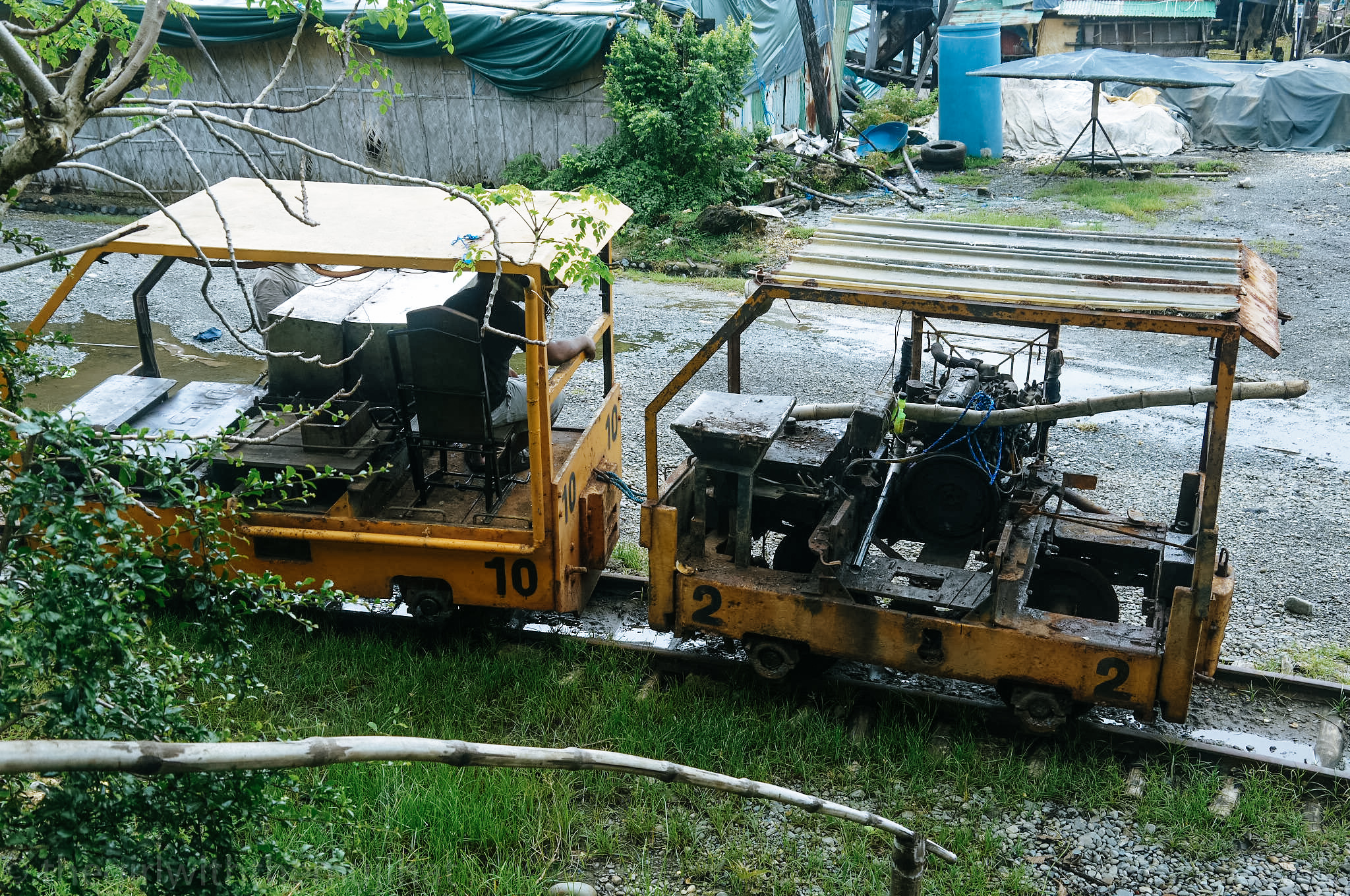 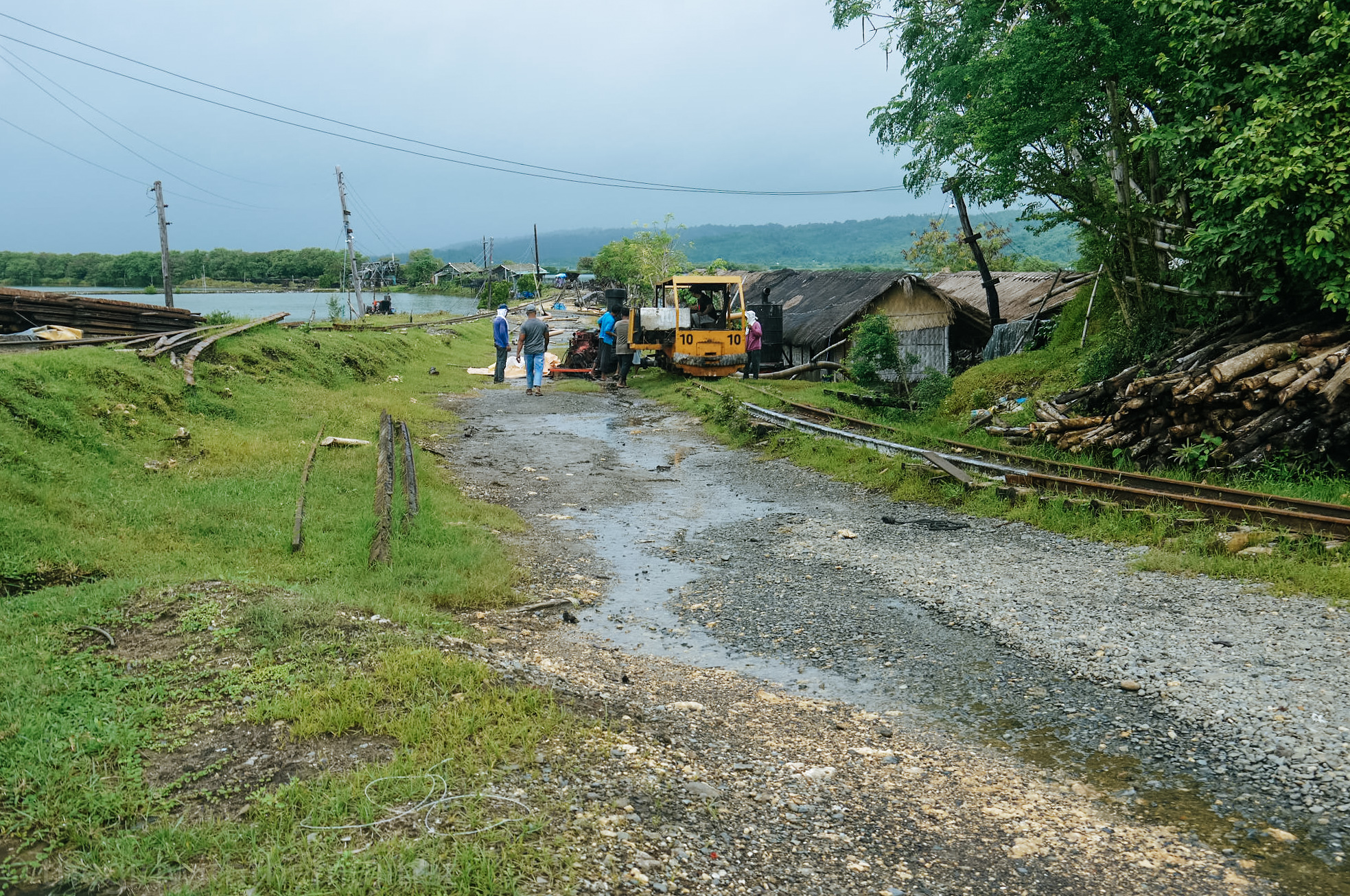 Pacific Farms Inc. has its own skilled workers including mechanical engineers, welders, electricians who designed, built, and maintain a unique locomotive ride. You can take this train to circuit along the salt farm’s 3-kilometre rail system overviewing the farm’s large salt bed harvesting area. You would get to see the salt warehouse, salt washer area (where the harvested salt is washed with saturated brine, preventing it from dissolving) and the large bed/crystallizer areas.

We rode the locomotive and took the photo above. As you can see it was pouring!

The company history is discussed inside the PFI’s oldest building, the administrative office, through a short program prepared by the employees.

Here, you are taken down memory lane highlighting the farm’s moral values and how it came to be. You’d see salt farm maps, look at old photographs depicting the company evolution eras, as well as learn the Pacific Farms’ prayer and catchy hymn.

Also, inside the admin office is a small stall where you can buy souvenirs from the farm. I highly recommend you buy the salt harvested from this farm.

The table salt that we consume at home is high-likely the “killer salt” that’s packed with high sodium content. Pacific Farms Inc.’s salt is the “healer salt”. It’s natural, organic, mineral-rich and relatively low in sodium.

Consequently, the products developed by PFI have significant health benefits. I recommend you try the Nigari drops which provide minerals that your body needs, the fish sauce that is not too salty but tastes like a “real fish sauce”, the Tropics spa treatment salt, and the gourmet salt Aro-en.

If you are an athlete, you should also buy the Stamina, an anti-dehydration salt. I’m creating a separate post about these products and my review for the Pacific Farms Inc.’ products that I’ve got to try myself.

The Pacific Farms, Inc. Agri-Eco Tour is capped off with a feast of the farm’s homegrown dishes: mighty energy eggs with sea purslane, special Lechon, Pinaupong Manok, and Malunggay tea, to name a few…

How to get to Pacific Farms Inc.

Via commute (with arranged pick up from the Alaminos terminal)

Take Five Star Bus from Cubao. Get off at Alaminos Terminal.

I can say that the Pacific Farms, Inc. Agri-Eco Tour was eye-opening and informative. It was a wake-up call—for me as a travel blogger, a salt consumer, and a Filipino citizen. PFI’s role in producing such experiential, socially-relevant itinerary is beyond description. I thank Mr. Johnny Konghun, Mr. Glenn Konghun, Mr. Gerald Konghun, and the entire PFI family from the bottom of my heart! I imagine you could visit the Pacific Farms Inc. and had as great a time as we did in this incredible salt farm tour! 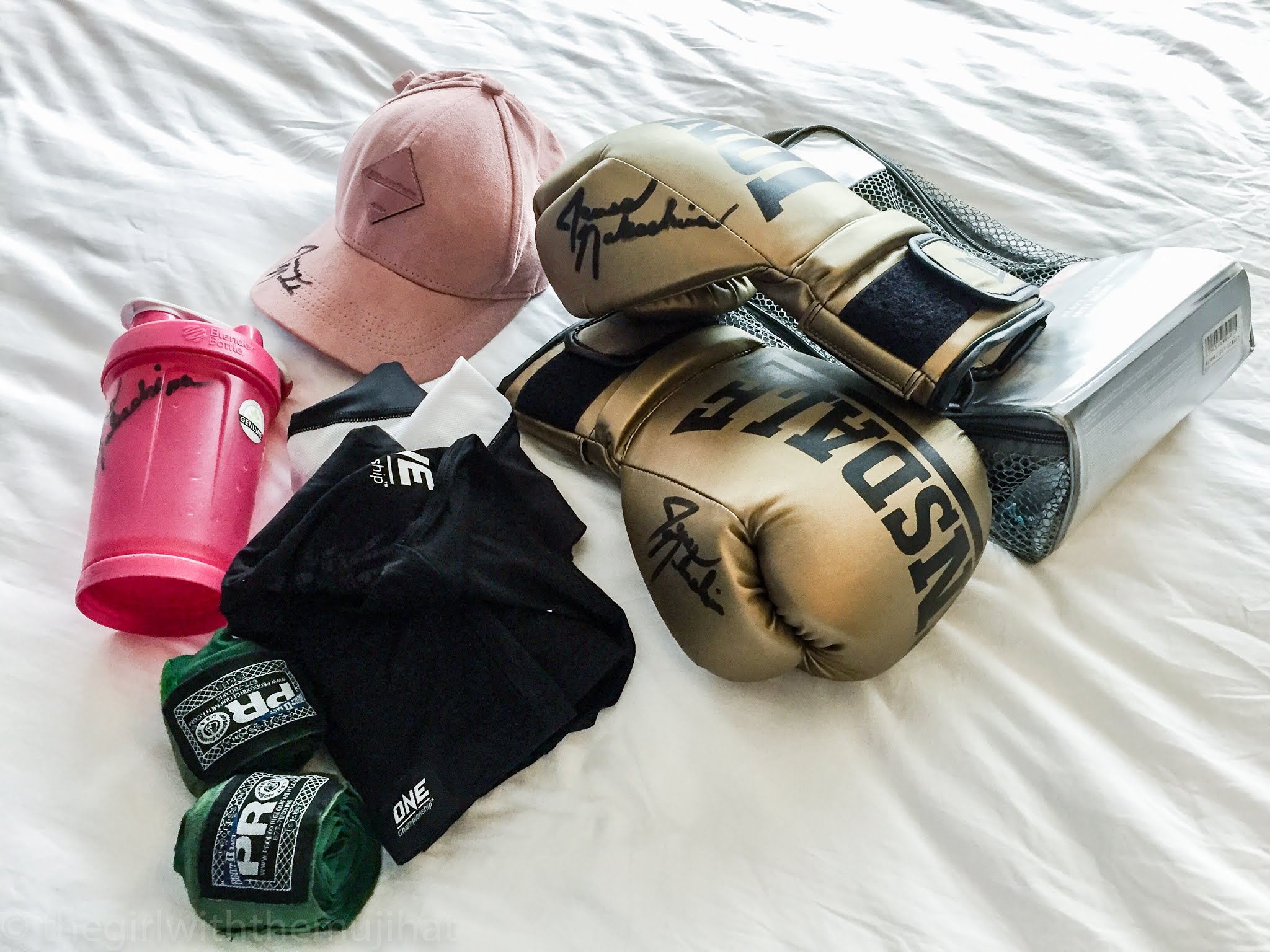