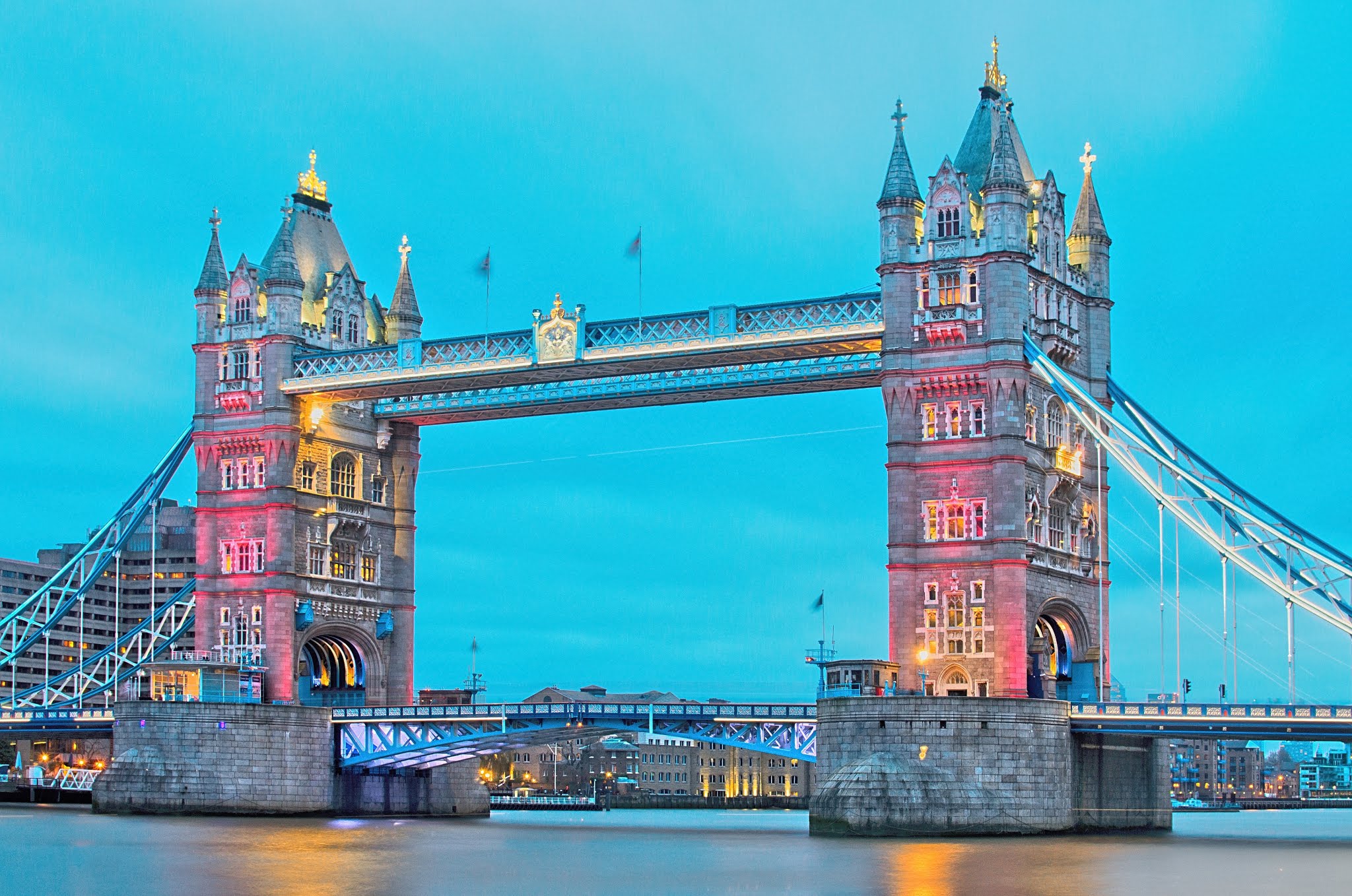 The United Kingdom is the country of beautiful sceneries and delightful views worth to be a picture or part of heaven. Some of the areas of England are an accurate representation of the United Kingdom’s culture and history and enchantress natural beauty. Millions of tourists attracted to charmer United Kingdom every year which will increase in the future.

Check out these top-rated tourist spots in the United Kingdom:

Canterbury Cathedral draws tourist attention as the place of murder of Thomas Becket. The building of Canterbury Cathedral has its hidden histories and mysteries with unique architectural styles and extensive size. The entrance of Cathedral will stun you by its historic tall, cluster pillars and gothic windows. Altar of the sword’s point is the most famous point of the building because it seems the exact site of the murder of Thomas Becket. The Cathedral tombs enhance the uniqueness of the building.

Chester Zoo is located in Chester. Chester is the old city which has its connections with Saxons, Scots, Normans and Vikings. It remains under sustentation for more than 50 years. Chester zoo is the most famous and biggest zoo in the United Kingdom. It is the home of more than 11,000 animals.  The points of attraction of tourists are Europe’s largest tropical house, Chimpanzee Island, penguin pool and Blue Planet Aquarium which is home to 50 marine species.

It is included in 12 top-ranked largest lakes of the United Kingdom. The travelers of England should never miss this beauty of nature. Lake District National Park covers some area of 900 square miles full of delightful sceneries like Scafell Pike of 3,210 feet and lovely aesthetic small towns like Grasmere.

London is the capital and most glamorous city of England. According to the mayor of London, Sadiq Khan, London will hopefully get 40 million visitors annually from 2025, which will make it the greatest city in the world. London is inspected to be the most influential and visited place due to its culture, art and history. London was the host of the Summer Olympic Games in 2012. Fringe Theatres and Museums are also the beauty of this city. The capital of the United Kingdom has a broad history of Anglo-Saxons and Vikings. In order to visit this historic and beautiful city, the hackney carriage is the safest and comfortable mode of transport.

Reading is the most important town of Berkshire. It is famous for trading in the medieval ages, but the town was severely influenced due to the English Civil War. Reading is identified as the top-ranked economic area due to its development in the field of IT, and nowadays, it’s the vital commercial center. It organizes the Reading Festival every year-biggest music festival of England-which attracts visitors from all over the world. Visitors of this developed town of Berkshire should use the facility of a Reading taxi which is cheap and convenient.

Stonehenge is the most popular prehistoric monument of United Kingdom. It seems as a ring of stones. These stones are of 13 feet height, 7 feet width and 25 tons weight. Archaeologists said that it was built from 3000 BC to 2000 BC.  Stonehenge is the most visited place by tourists due to which visitors need to purchase a ticket for the entry. It is located in Wiltshire.

The Cotswolds is one of most charming cities of England which covers around787 squares miles. It is the place of astonishing natural beauty and it is the heart of tourism in England. Castle Combe, Chipping Norton, and Tetbury are the masterpieces of Cotswolds due to their incredible natural beauty. The wonderful views of Severn Valley make visitors think that they are standing in heaven.

8. The Roman Baths and Georgian City of Bath

Britain’s most attractive city Bath is full of artistic and magnificent places and listed in world’s heritage sites in 1987. Romans Baths are the eye catcher of tourists in the United Kingdom. Roman Baths are a place of relaxation established by Romans in 75 BC. The water of baths possesses 43 different minerals and its healing powers are popular among people. Roman Baths are also famous among visitors due to the unique Roman architecture. The other places in the glamorous city (Bath) are Bath Abbey, Pulteney Bridge, Thermae Bath Spa, Holburne Museum, Jane Austen Centre and Theatre Royal.

Warwick castle was constructed by William the Conqueror in 1068. It is built by a wooden fort and highly attracted tourist’s attention due to its history and unique architecture works. Warwick Castle is on the huge area included a number of gardens, out of which most famous are peacock reserve and rose garden. The 14 century Castle Dungeon full of its terrible past became the hub of visitor’s attention. Also, wax model museum and full-scale working siege machine are the eye catchers of tourists in Warwick Castle.

York is a historic city in North Yorkshire. York was established by Romans in 71 AD.  The economy of York was raised in 19th century due to its railway network, University of York, national health services and most importantly tourism. York Castle was constructed by Normans in 1068. Its remaining part named as Clifford’s Tower made of wood. Clifford’s Tower was established in 13 Century named after Roger de Clifford. This castle is very popular among visitors due to its beautiful views. Tourists are also attracted to York Castle Museum and Shambles.

Author Bio: Jessica Watson has 4 years of experience in writing travel and business-related articles. Currently, she is working with Taxi In Reading who are famous for their Heathrow to Reading taxi which is cheapest in the whole Berkshire. 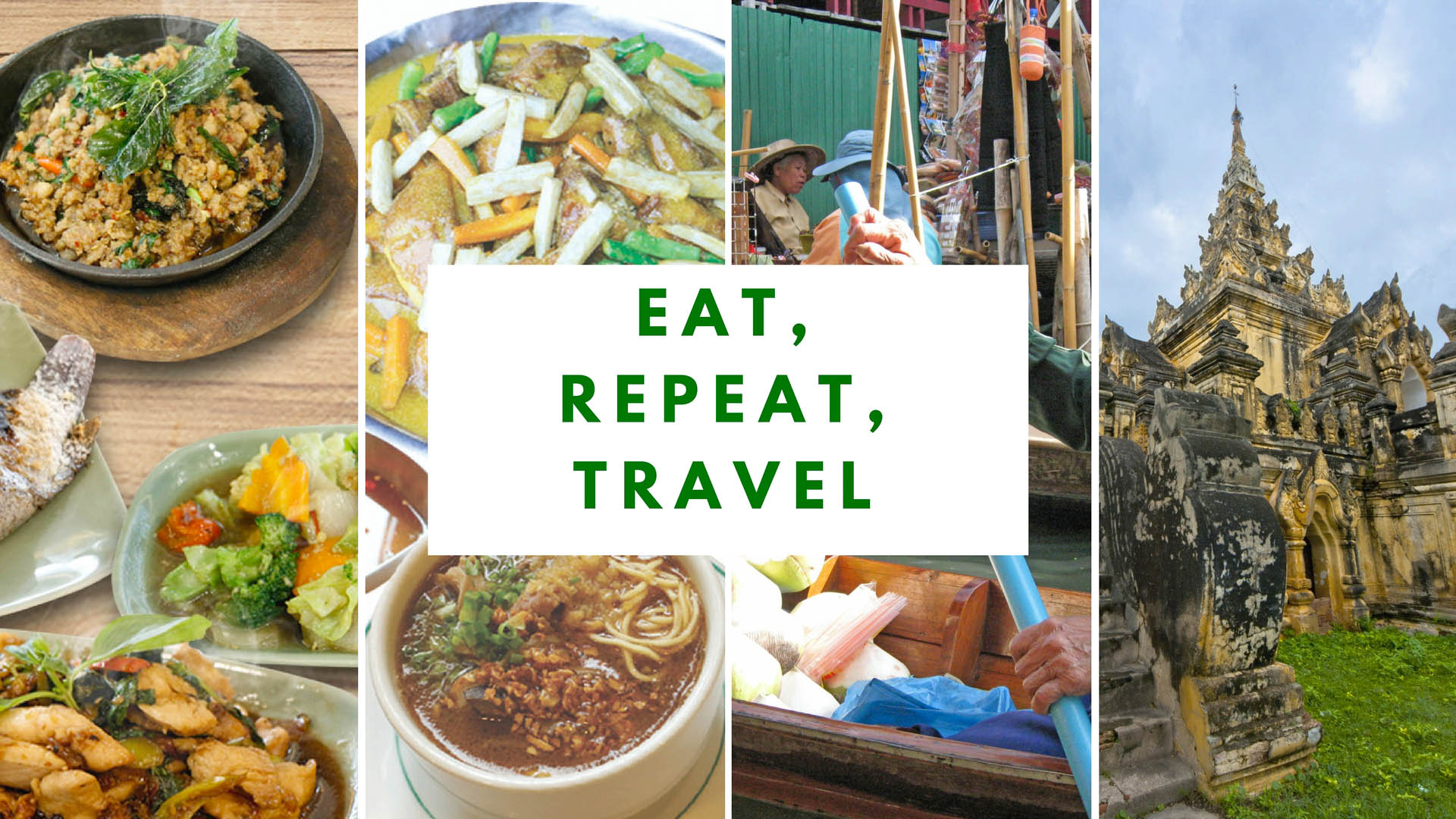 Cabalen Group of Companies on their 31st Anniversary brings you the most exciting prizes with their Eat, Repeat, Win and Travel Raffle Promo! A trip to Asia’s dream destinations –Hongkong and Disneyland, Bali, Indonesia and Hanoi, Vietnam – awaits the three (3) lucky winners this year! Plus staycation packages to Bataan, Zambales and Tanay, Rizal will be given away.

How to join the raffle?

The collaboration of all the restaurants – Cabalen Eat All U Can, Eat All U Want, Soi Restaurant, Mangan Restaurant, Eat Pinoy, BKK Express and Cerveseria – will surely satisfy your food cravings with their wide array of food highlights and exciting gadgets and international trips.

A minimum spend of P1,499 at any of these restaurants entitles you to one (1) raffle card for the Grand Draw. Upon completing your Grand Draw Entry you also get a bonus P350 worth of Gift Certificate valid to all Cabalen Group of Restaurants!

Aside from the international trips and calming staycations, you also get a chance to win weekly prizes all throughout the month of August. Yes! You can win gadgets, various passes and gift certificates every week! 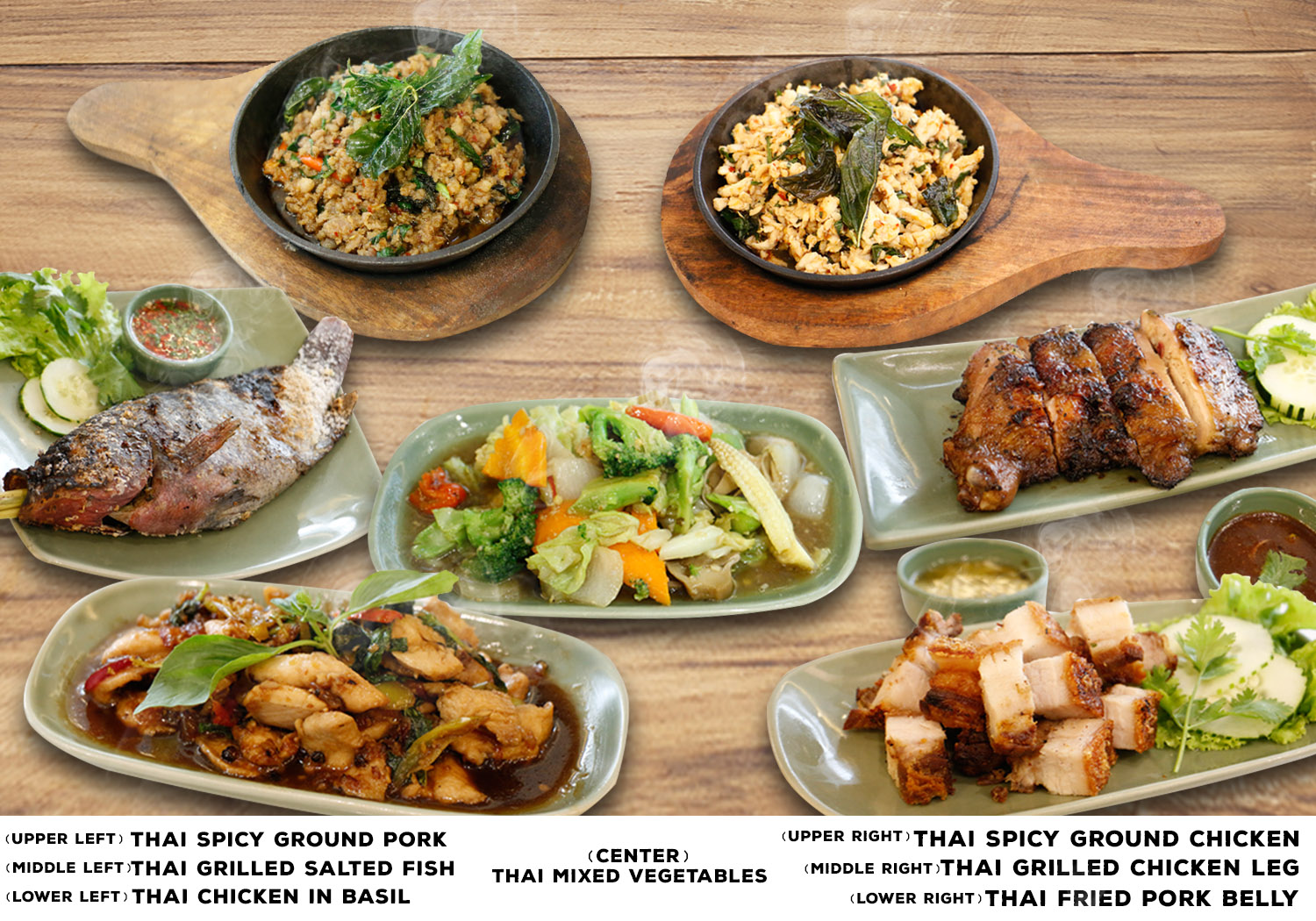 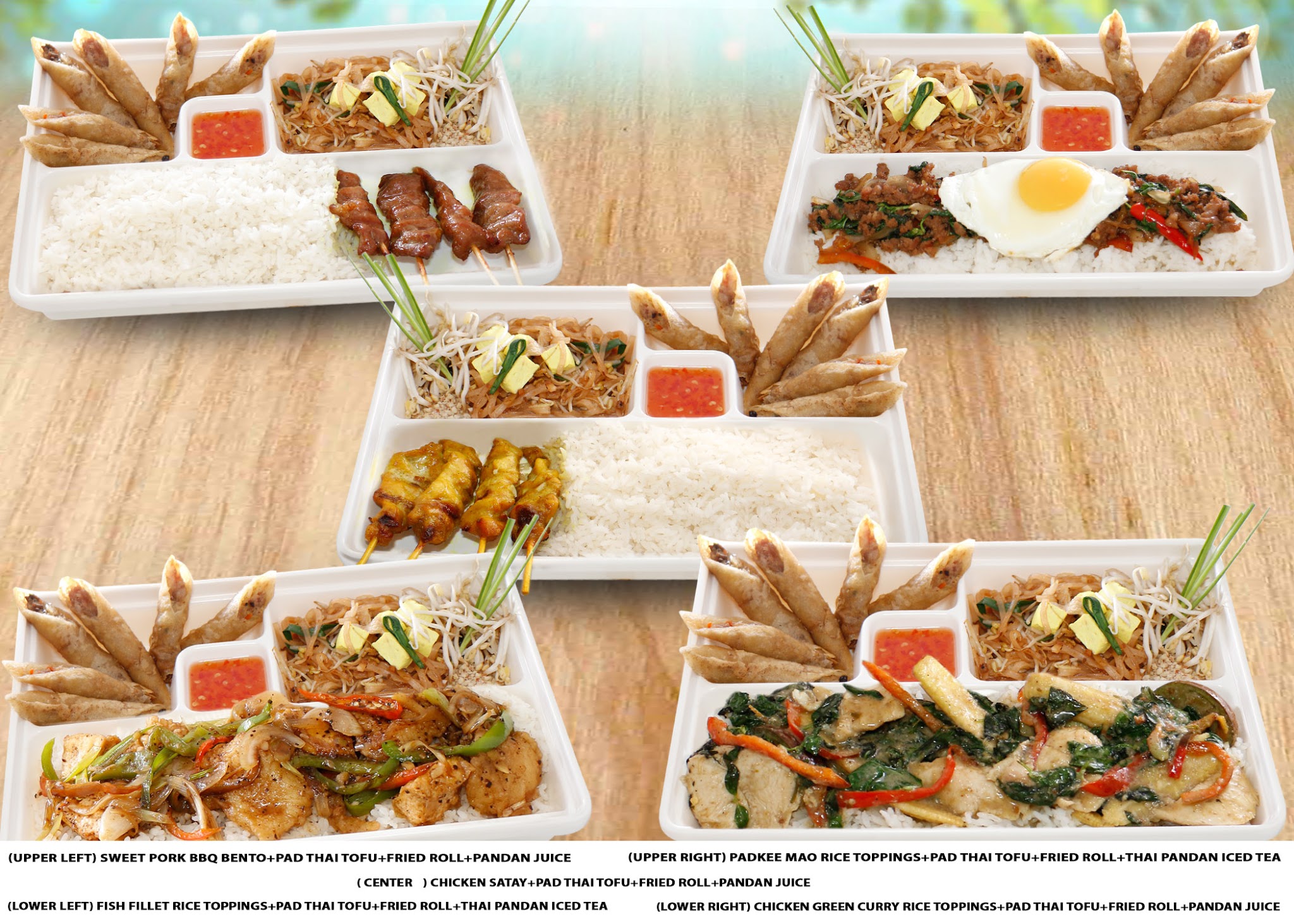 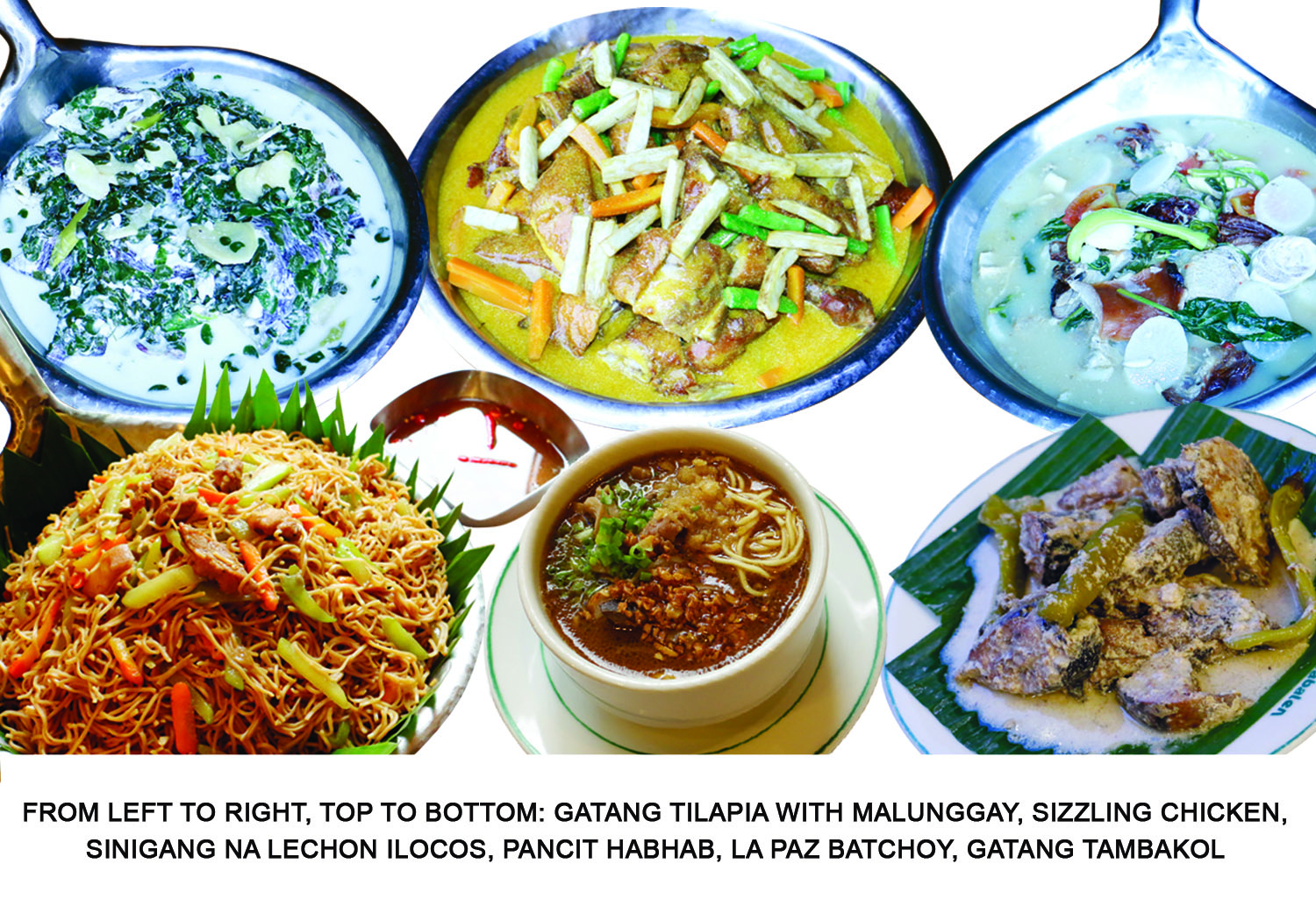 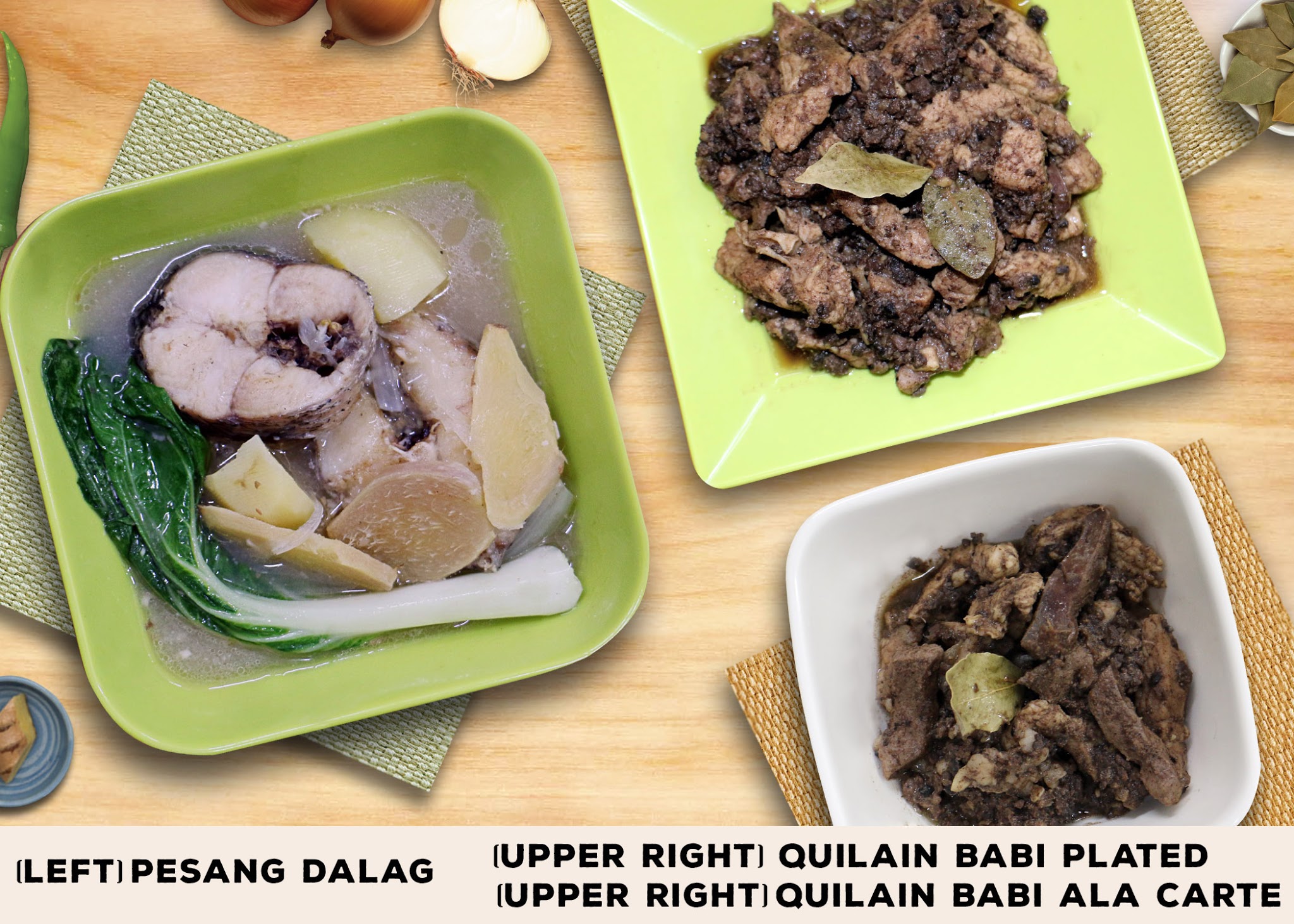 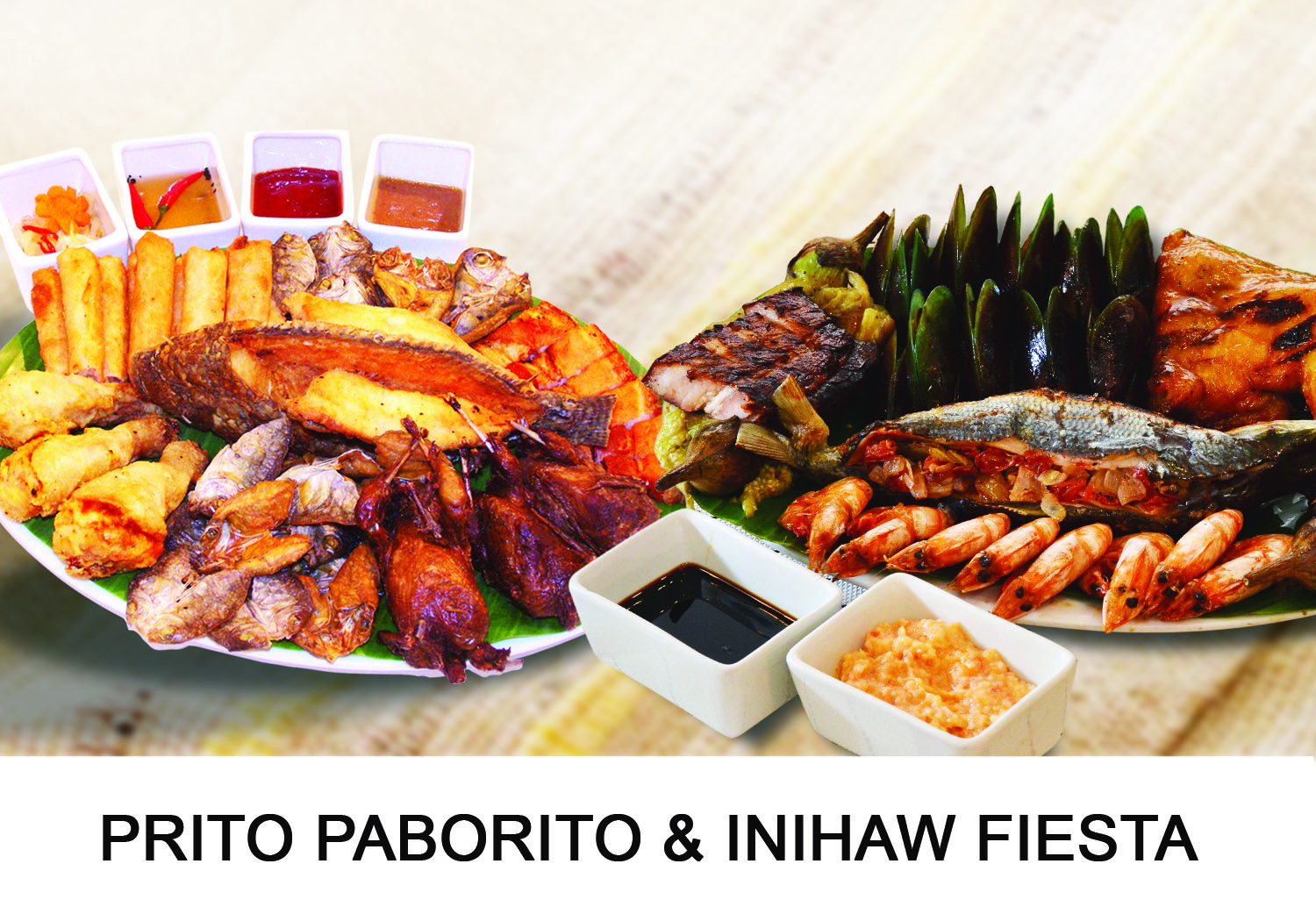 Get the ultimate food experience only with Cabalen Group of Restaurants – Cabalen Eat All U Can, Eat All U Want, Soi Restaurant, Mangan Restaurant, Eat Pinoy, BKK Express and Cerveseria and win amazing trips and staycations from Air You Go Travels,  Las Casas Filipinas De Acuzar, Ten Cents to Heaven Leisure Camp and Inflatable Island. That’s not all; get exciting prizes every week from Upside Down Museum, Myphone, Western Appliances and Star City. 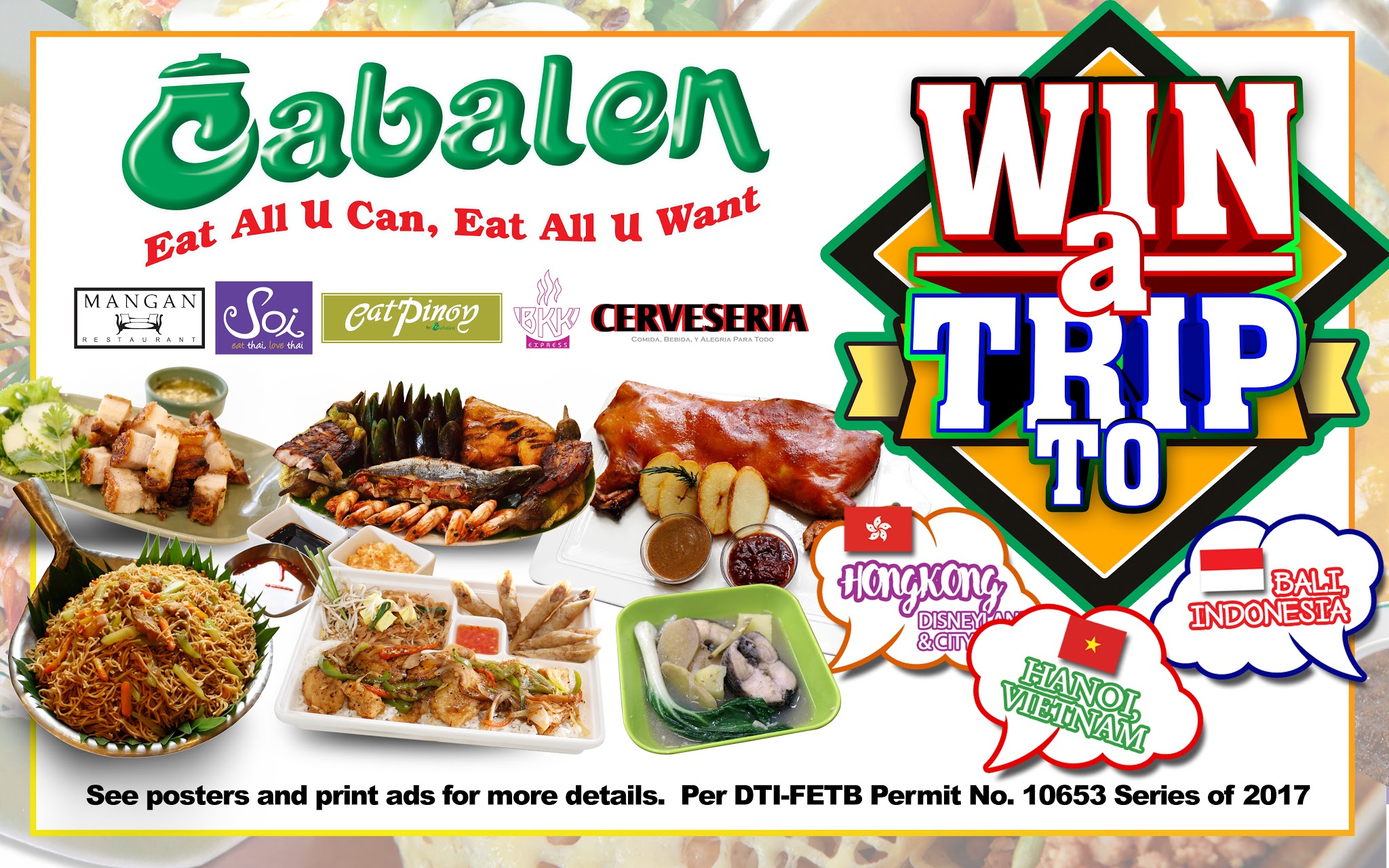 and for Classic Filipino Comfort Food, go to Eat Pinoy at Food on Four, SM Aura 553-2717 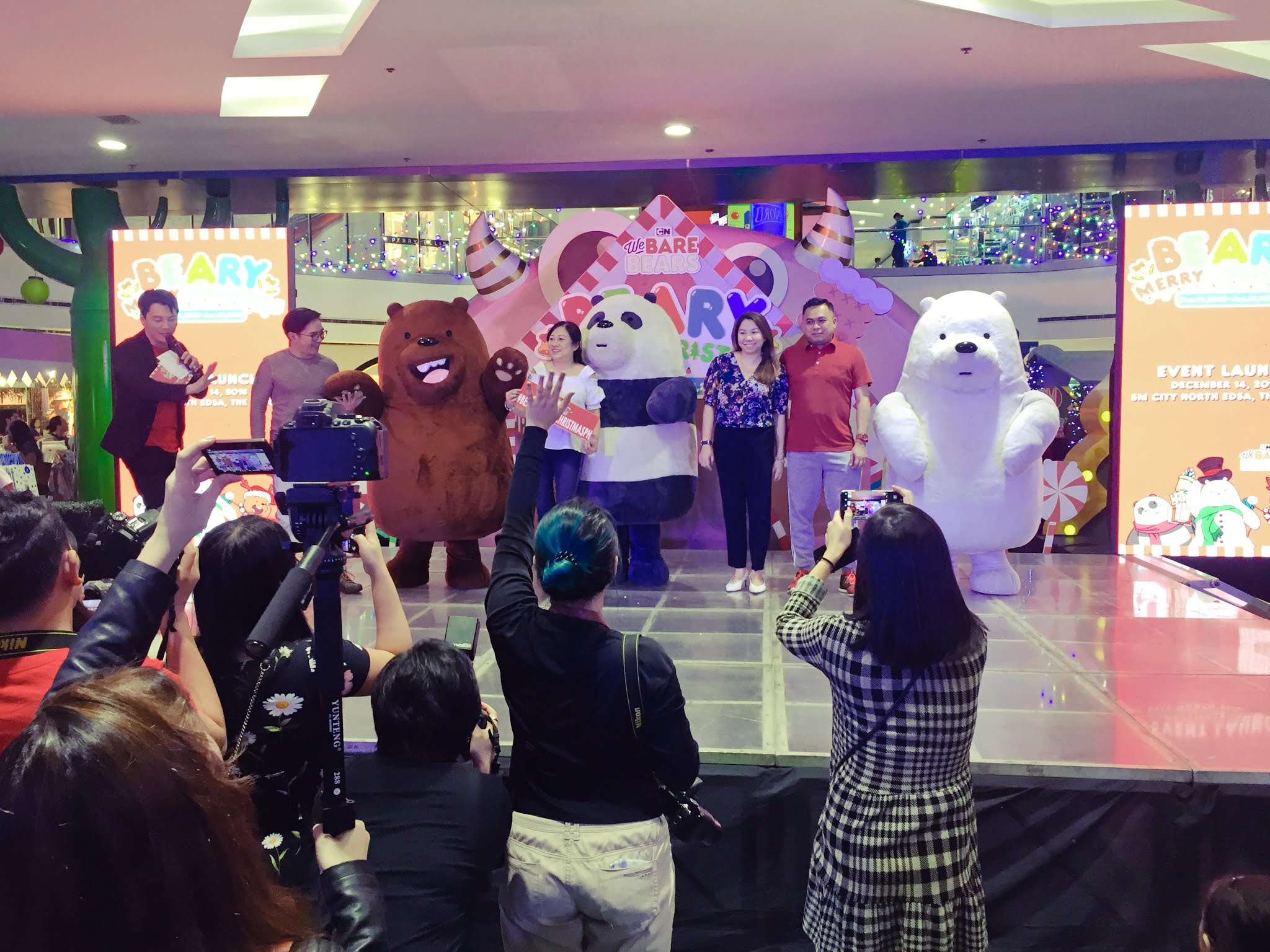 ‘Tis the season to be jolly! Really! So many fun activities to do at SM Shopping Malls to make the holidays merrier with your little ones!

At SM City North Edsa’s The Block New Tower, you can enjoy dancing, doing art, decorating, or even basketball arcade games, of course with the WE BARE BEARS Grizz, Pan Pan and Ice Bear!

We Bare Bears is an American animated sitcom created by Daniel Chong for Cartoon Network. The funny yet witty series premiered on July 27, 2015 and has long been watched by both kids and the kids at heart. 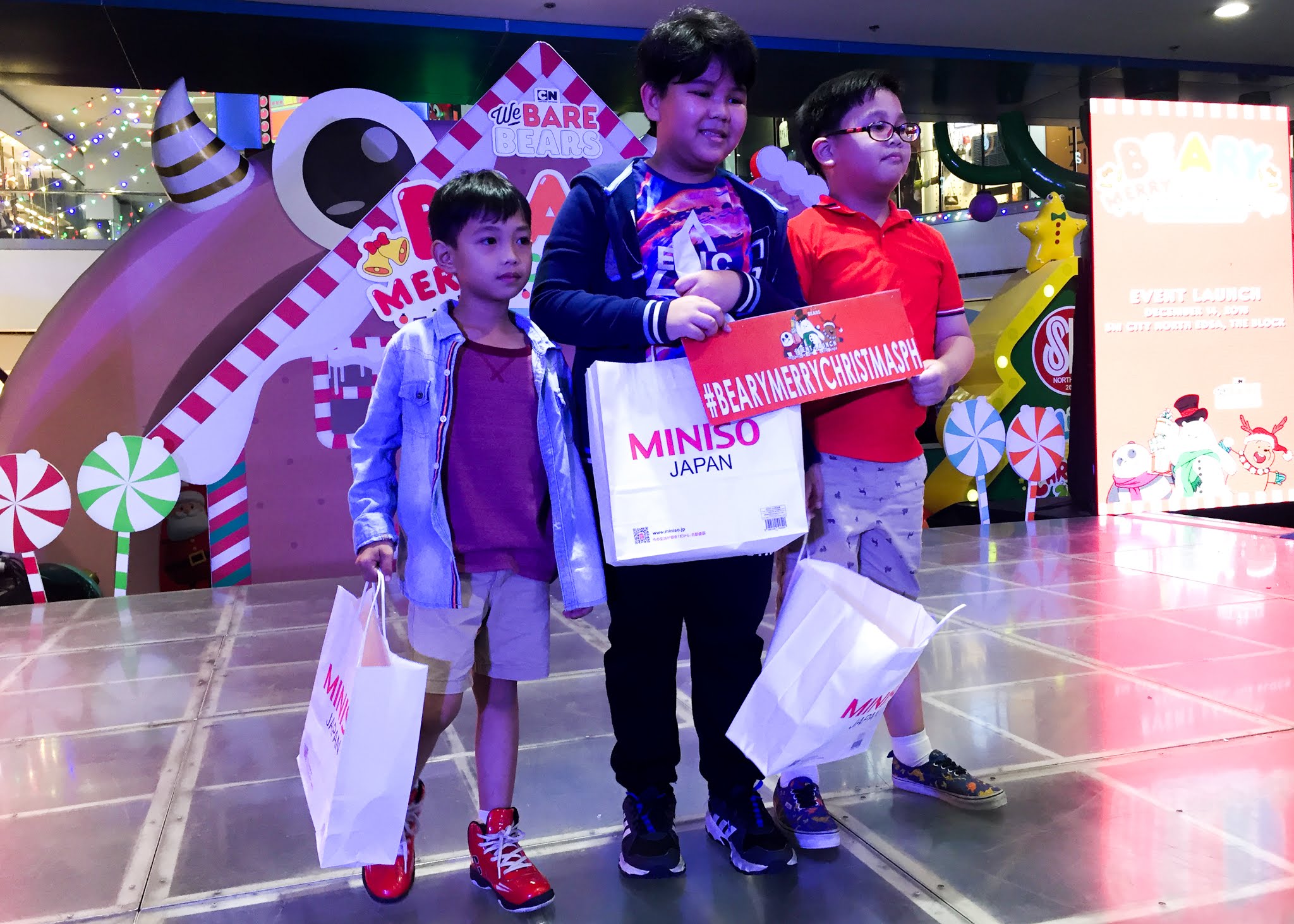 ‘Tis the season to be jolly! Really! So many fun activities to do at SM malls to enjoy the holidays with your little ones! At SM NORTH new tower, you can enjoy dancing, doing art, decorating, or even basketball arcade games, of course with the WE BARE BEARS Grizz, Pan Pan and Ice Bear! Check them out from Dec 14 to January 31, 2019 😍 Meet and greet your favorite bears on the following dates: Dec 22,23,29,30 . . . . #webarebears #holidaysatSM #bearymerrychristmas #bearymerrychristmasph #pmcmevents #holidays #christmas #kiddiechristmas #lifestyle #mommybloggers #familyblog #blogger #filipinoblogger #bears #grizzlybear #panda #icebear #cartoonnetwork 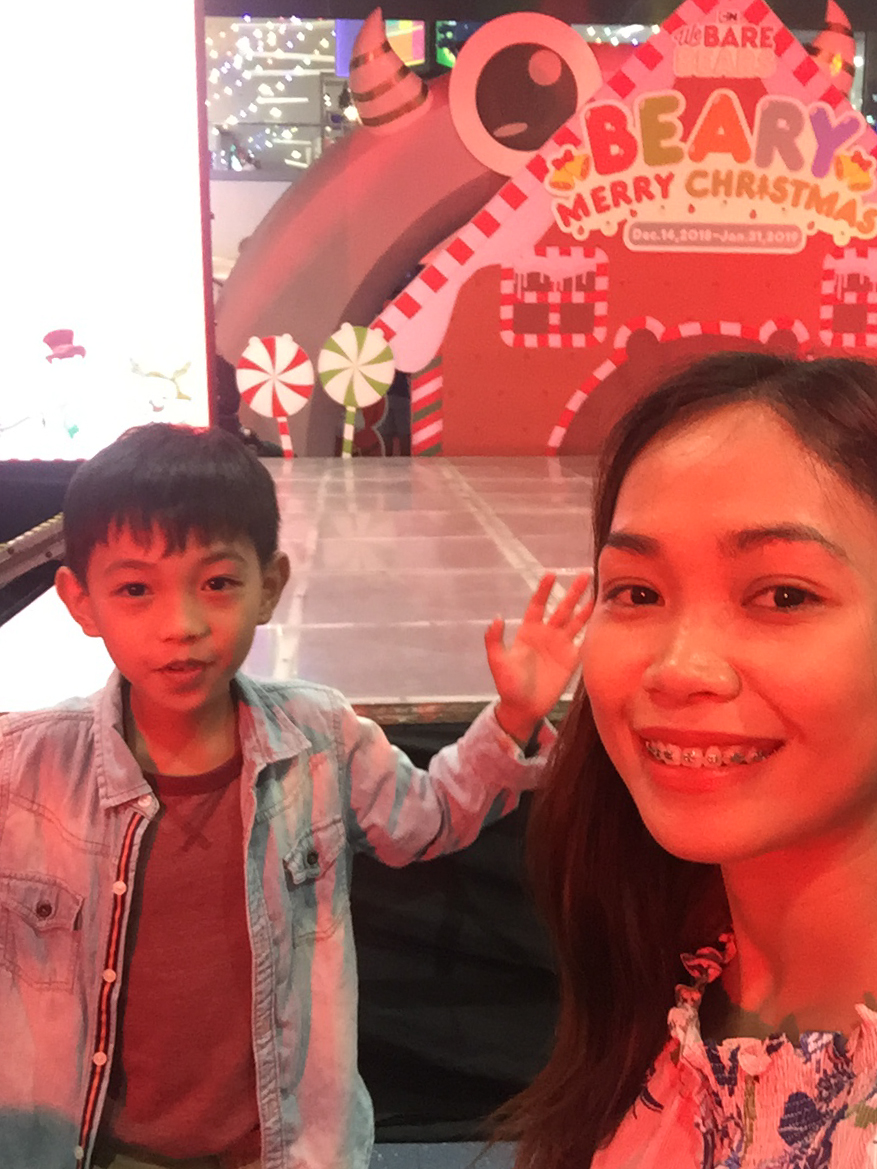 What you can enjoy with your kids:

We spent most minutes here since Ethan is really into drawing. I enjoyed watching him trace on the/ color each of the three bears photos. 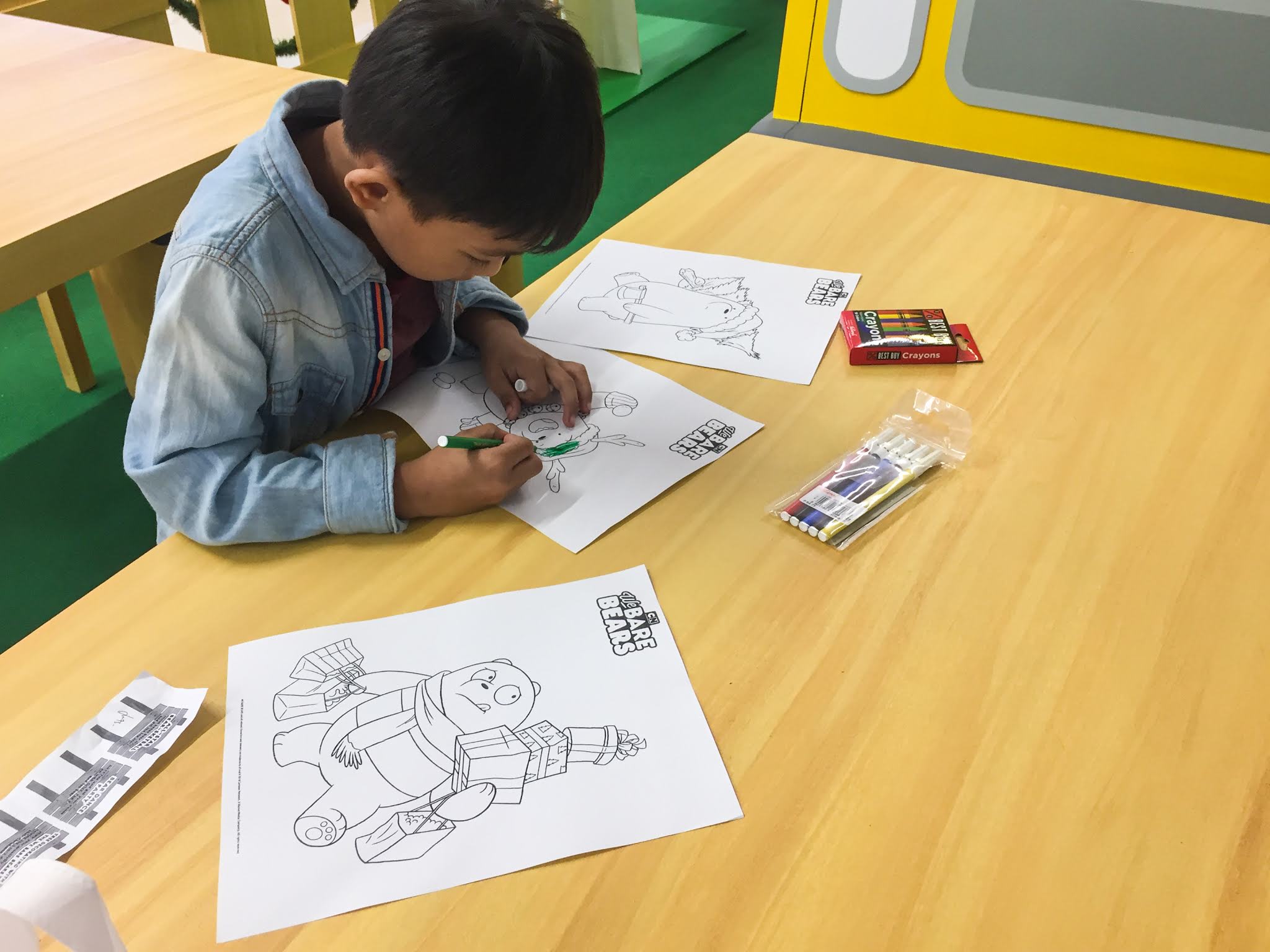 Get your kid to socialize with other kids through this sort of Kinect rhythmic game. As for me and Ethan, doing this together was healthy minutes of fun bonding. 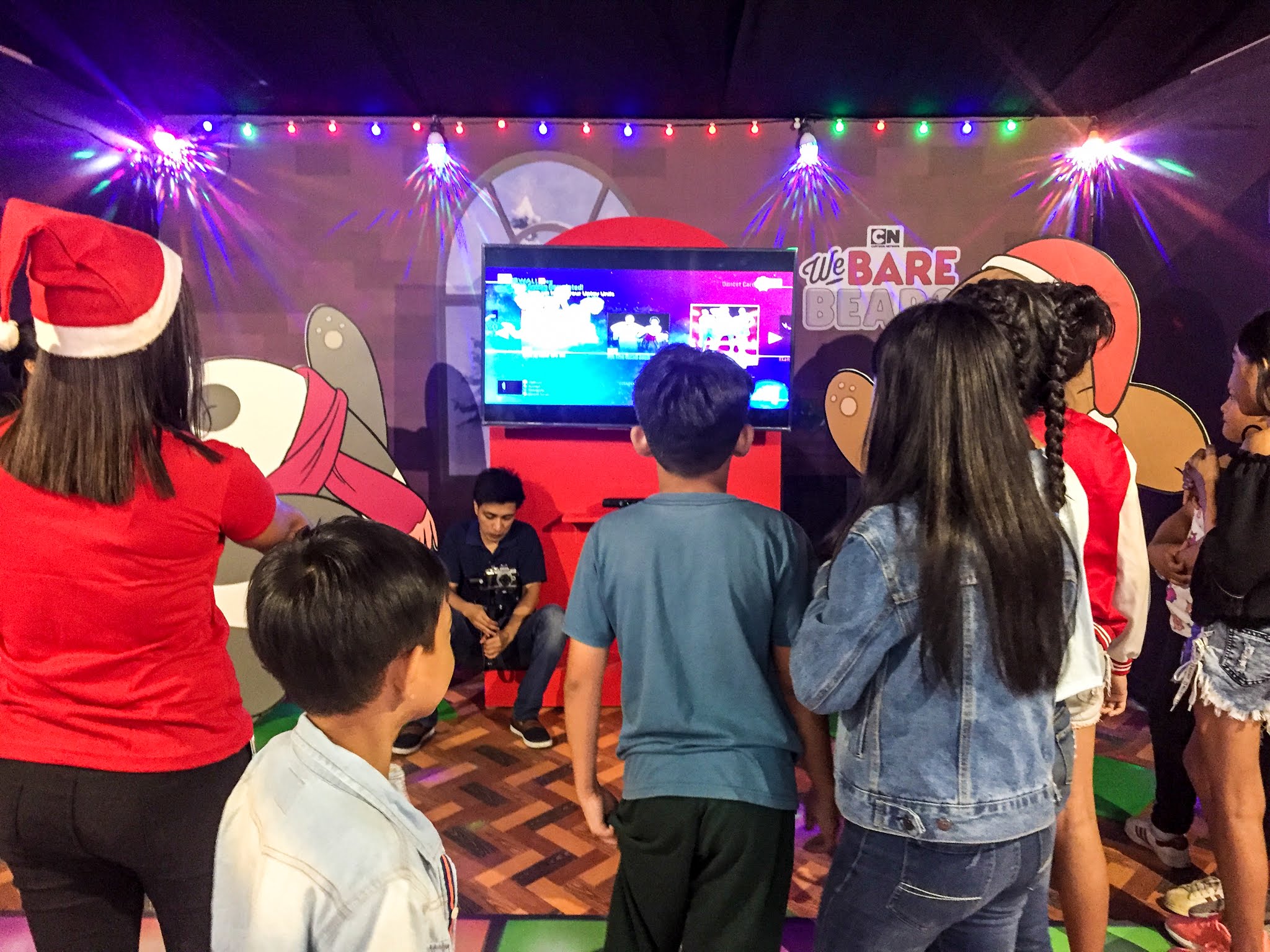 TREE DECORATION WITH THE WE BARE BEARS

We’ve already put up our Christmas tree but this has still been fun since the tree is bigger and my son liked the uncomplicated decors. 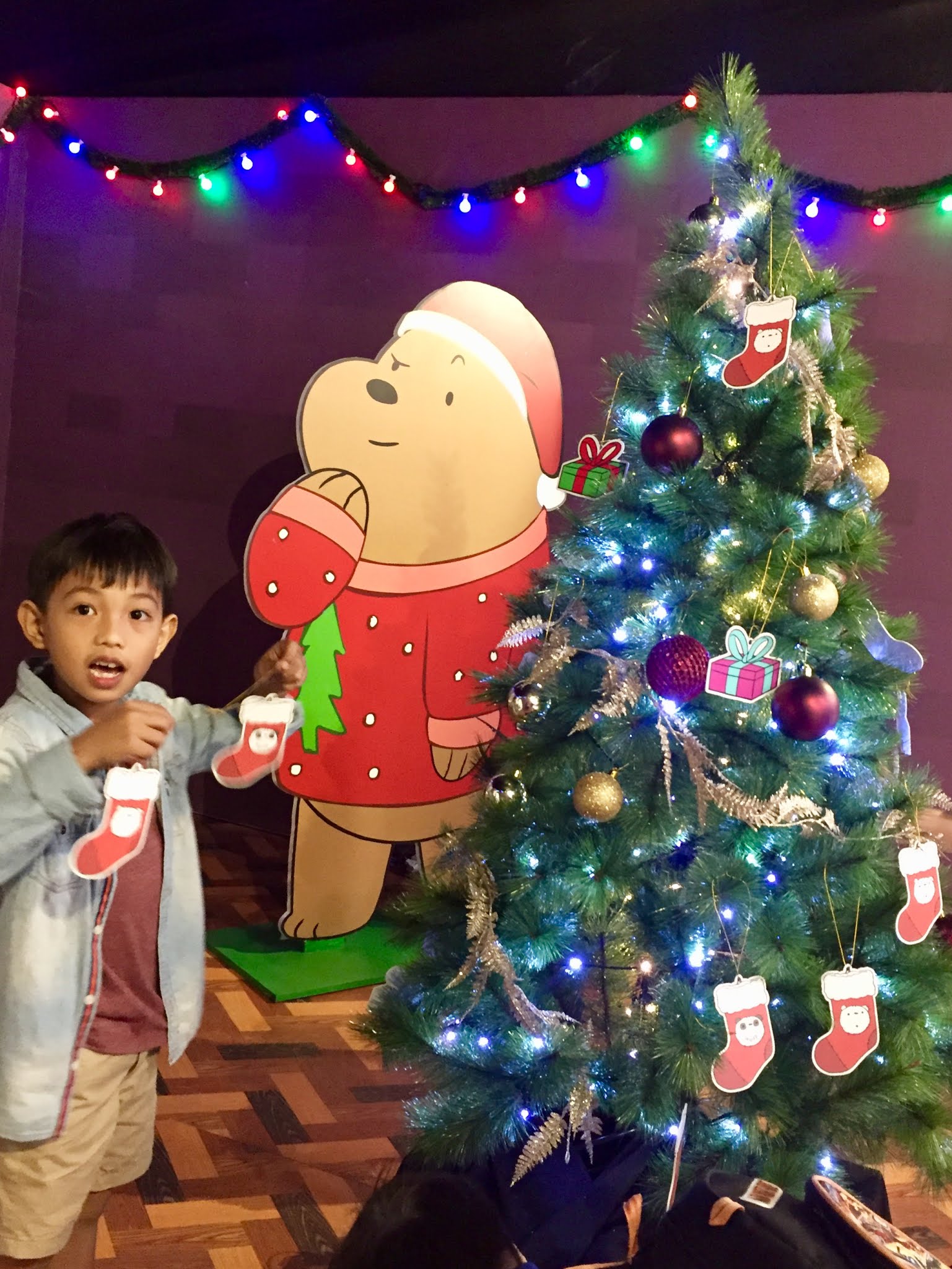 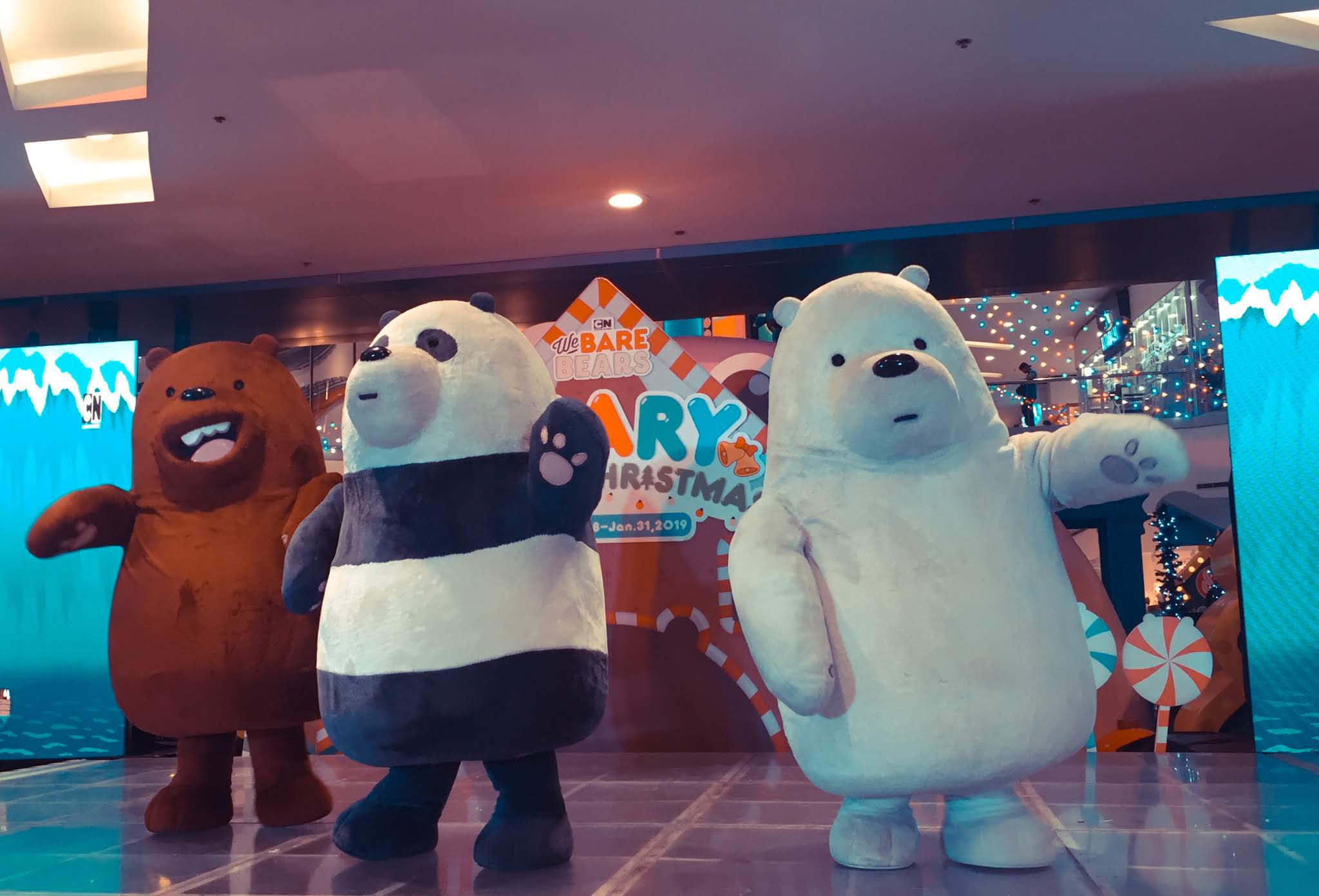 It is nice to have activities/ events like this in the mall especially when it involves cute characters we love.

You can also meet and greet your favorite bears on the following dates: December 22, 23, 29, 30. Buy their merchandize, complete the free activities in its station, take photos and yeah, don’t forget to have fun!

What do you think about this post? Do you want to meet the WE BARE BEARS bears? What is your plan this holidays? 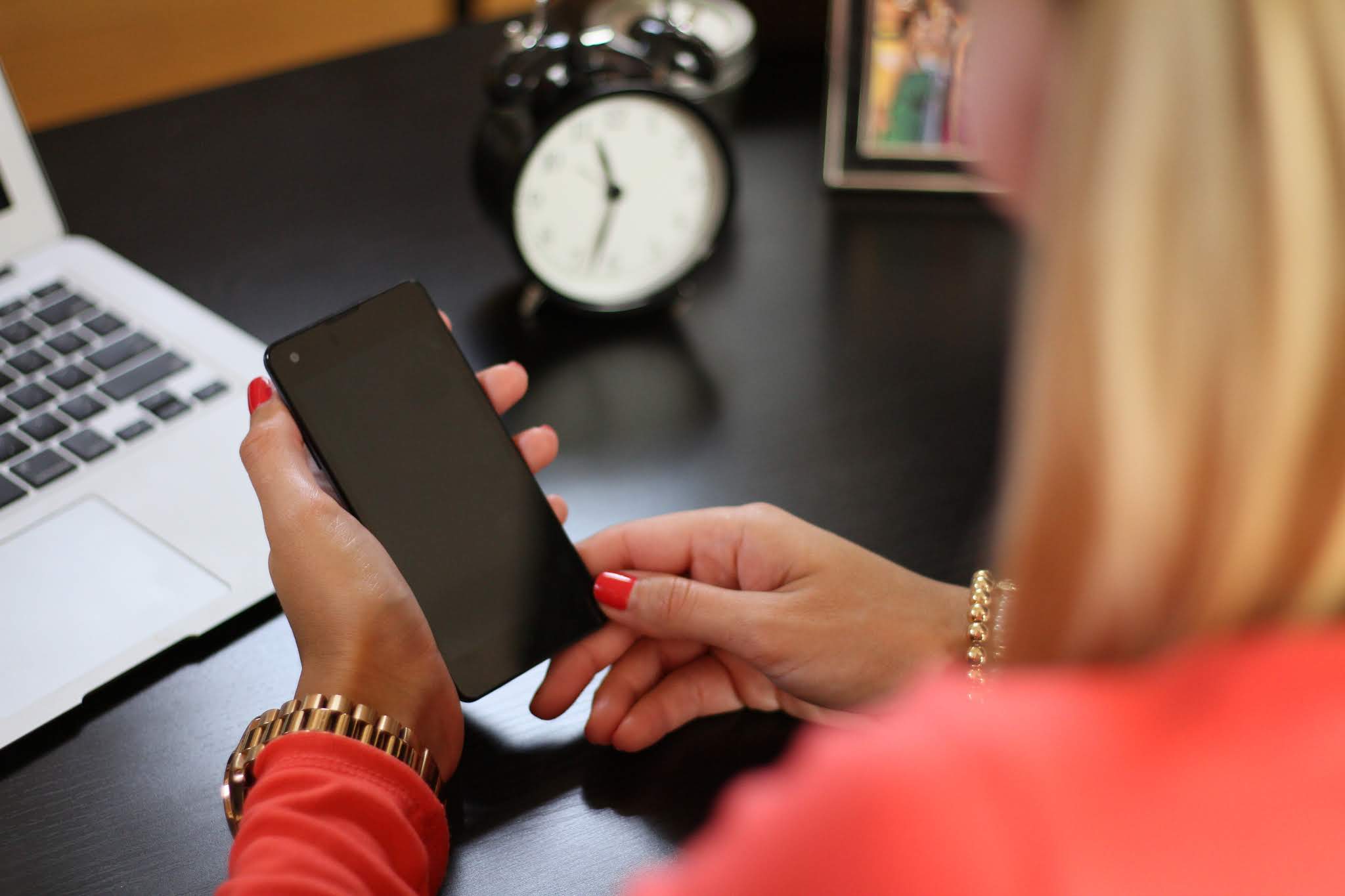 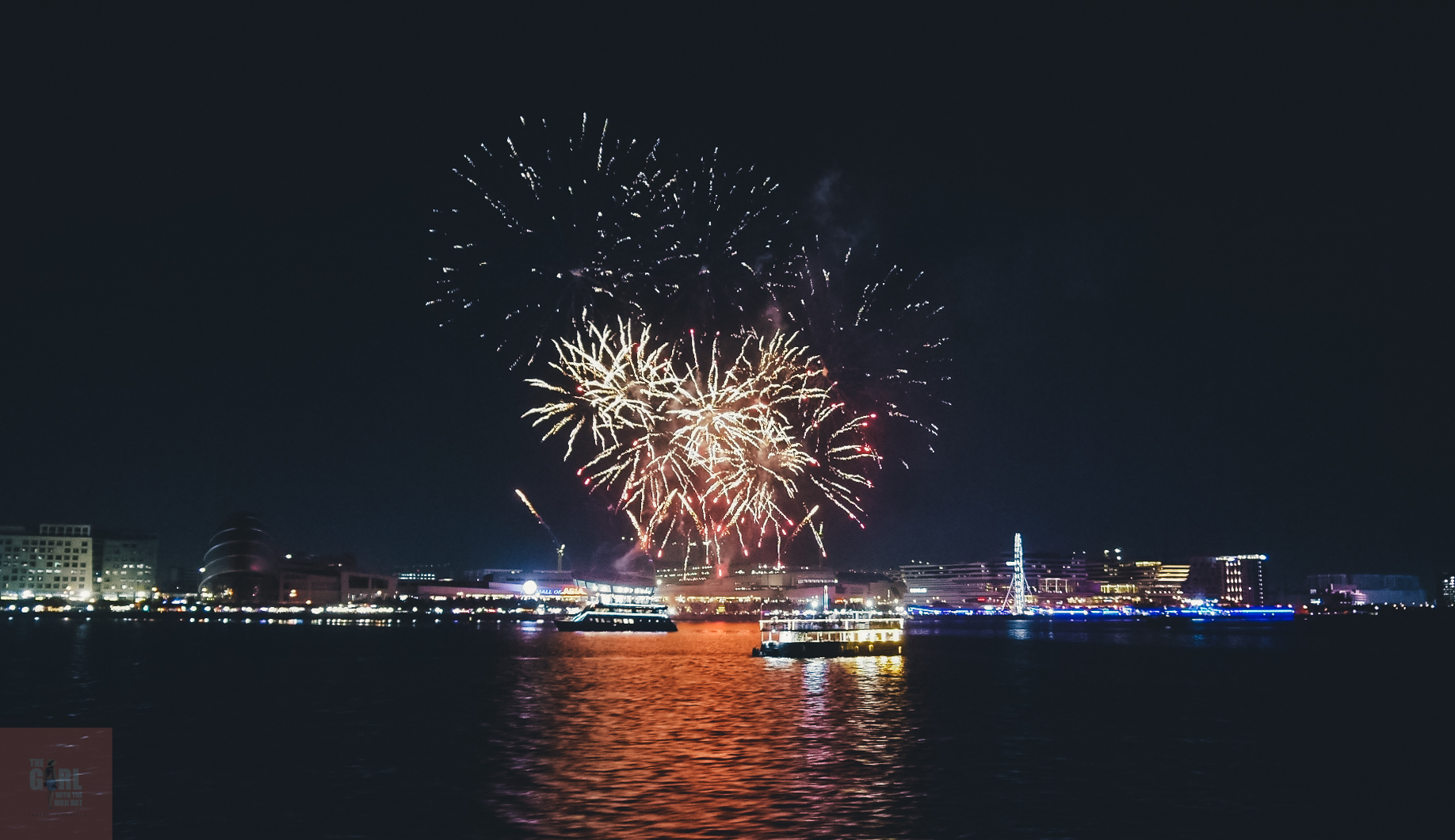